[ The Korea Herald – Send E-mail ]
[Herald Interview] 6GAB: Six friends with something to prove
New band debuts with ‘Well-known Melody’
By Korea Herald
Published : May 28, 2014 - 20:29
Updated : May 28, 2014 - 20:32
The determination in their eyes is undeniable as the six tight-knit school chums from Baekseok University in South Chungcheong Province talk about their mission to show the public that aspiring musicians don’t have to come out of one of the elite universities in Seoul to make a dent in the music scene.

Classmates S.Jay, Coontza, Junohwani, Pangju, dB and JINew all met as music technology majors, with each of the members focusing on songwriting. However, shortly after they entered school, it was announced that the department of music technology was being removed from the university’s curriculum.

“Unfortunately, our school is no longer offering this department as a major for its students,” S.Jay explained. “So for people who are looking to try and pursue this type of practical use music department, they would have to go to one of the famous Seoul schools.” 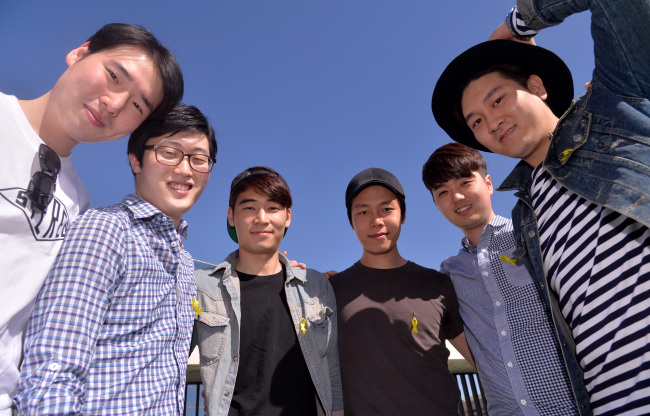 Members of the newly debuted band 6GAB pose during an interview with The Korea Herald. (Lee Sang-sub/The Korea Herald)
“So in a lot of ways, we are here to prove ourselves,” dB added. “Even though our department is gone, we want to show people that we are still here and that we are just as capable and can do as well as anyone else.”

They were keen to present themselves as a band of six individual lyricists and composers.

“On top of us all playing various instruments, each and every one of us composes and writes our own songs,” says S.Jay. “Because of this we actually think of ourselves as having seven different genres. We each have our own musical background, tastes and flavors. So if you take our six styles and add one more for 6GAB when we play as a whole, it’s almost like us having seven distinct sounds.”

Touching upon the trapped feelings of being lonely in a rapidly changing world, 6GAB’s debut single starts off slow with a simple, contemporary rock guitar riff and somber vocals before it crescendos into a full band sound.

“It’s all about being stuck in a place or situation where everything around you is changing, but you’re not quite ready yet,” S.Jay added. “Finding hope and strength in others, that’s the feeling we wanted to convey.”

As a management-less, self-composing, self-producing and self-recording young student band, the members admit to having found it difficult to get their musical careers off the ground. But despite all the uphill battles that they have fought the aspiring artists are already planning to drop a new EP in July. They said that they are currently working on the tracks for 6GAB’s first full-length album.

“We are not interested in creating any kind of flashy music that will eventually go out of style,” said dB. “Years and years down the line, I want people to be able to listen to us, even our past songs, and think, ‘This is still good music.’”

“No matter what life has in store for us in the future and where we all may end up in the coming years ― even if we are off living in different cities ― our only hope is for the six of us to come together when we can and to continue making our music.”