[ The Korea Herald – Send E-mail ]
Opposition party pressures P.M. nominee to withdraw
By Korea Herald
Published : May 27, 2014 - 21:30
Updated : May 27, 2014 - 21:35
The main opposition New Politics Alliance for Democracy on Tuesday stepped up its offensive against prime ministerial nominee Ahn Dae-hee and urged him to decline the nomination amid escalating controversy over his high income and special favors he allegedly received.

Opposition lawmakers said the former Supreme Court judge is not suitable for the country’s No. 2 post and the job of leading the government’s reform efforts, claiming that he was one of the “gwanpia” himself. “Gwanpia” refers to the network of corruption linking former bureaucrats with the private sector.

Disputes have been growing over a sharp rise in Ahn’s income and other allegations. After he opened a legal office last July, he reported that he earned about 1.6 billion won ($1.56 million) in five months. Skeptics say he was able to make so much money in a short period of time because he received special treatment from his former colleagues. Ahn is also being accused of “inappropriately” defending a company in a corporate tax lawsuit while he was serving as the head of a tax investigation committee under the National Tax Service.

NPAD floor leader Rep. Park Young-sun said she will propose a bill to ban the appointment of ex-officials accused of having collusive ties with businesses.

“We plan to propose an ‘Ahn Dae-hee bill’ to stop (the government from) appointing ‘gwanpia’ officials like him,” Park said. 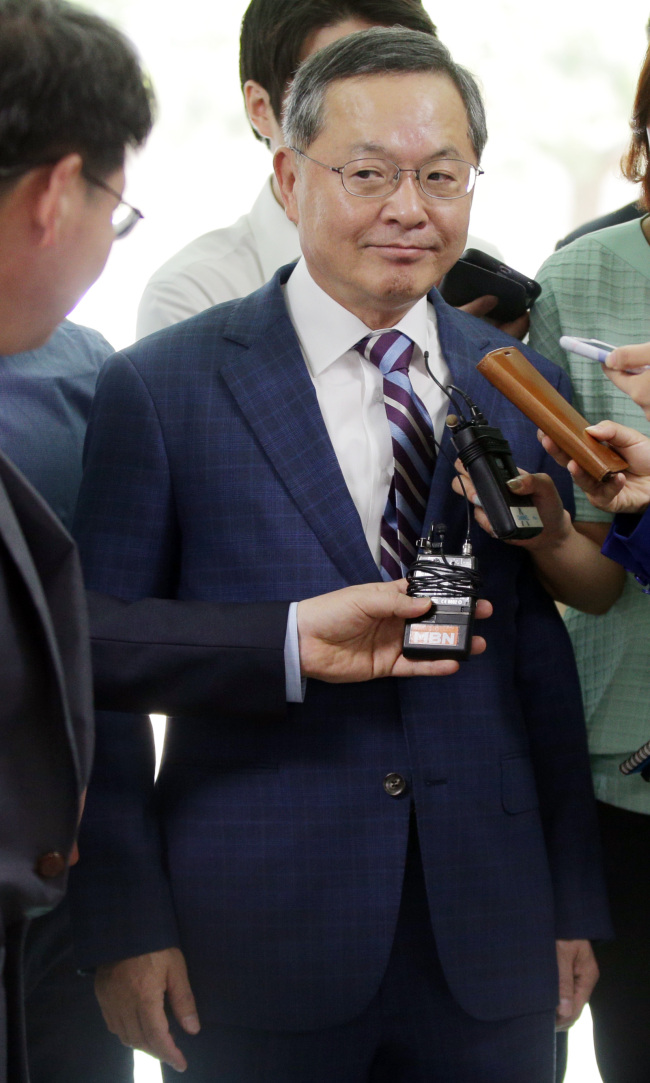 P.M. nominee Ahn Dae-hee
President Park Geun-hye nominated Ahn, a former star prosecutor, as the new prime minister on Thursday, hailing him as a corruption fighter who could end collusive ties between government officials and the business world and carry out her reform measures proposed in the wake of the Sewol disaster.

The president submitted a bill seeking parliamentary approval for Ahn’s nomination on Monday. But the opposition party urged President Park to reconsider.

Adding fuel to the mounting criticism, opposition lawmakers said Ahn was not an appropriate figure to rectify abnormal practices in public offices, citing speculation that he had benefited from “jeon-gwan-ye-u,” the practice of giving preferential treatment to retired officials. The practice is widespread in Korea, especially among prosecutors and judges.

“This is exactly the type of accumulated evil and cancerous build-up that President Park talked about,” said NPAD cochairman Kim Han-gil during a floor meeting. “How could an ex-official who made a fortune by enjoying special favors (after his retirement) eradicate a bureaucratic cartel?” he asked.

Bowing to the criticism, Ahn offered an apology Monday for causing public concern and vowed to return to society the 1.1 billion won that he earned as a lawyer over the past year. He said earlier that he had already donated 470 million won to underprivileged children and schools. Despite the apology and the donation plan, Ahn was hit by fresh allegations. Rep. Kim Ki-shik of the NPAD claimed that Ahn donated 300 million won right after incumbent Prime Minister Chung Hong-won offered to resign.

Calling Ahn’s motives “too political,” Rep. Kim claimed that the nominee had made the donation in order to get Park’s nomination for the prime ministerial post.

The party’s floor leader Rep. Park also lashed out at Ahn, saying that the he was trying to make a pay-off deal for the nation’s No. 2 post.

“The post of prime minister is not a post that can be taken by spitting out shady money,” Rep. Park said during the party’s meeting.