But it’s time for that image to change, representatives from the industry say.

Tim Williams, executive director of the Ohio Manufactured Homes Association, thinks people may be surprised by the homes if they see them.

“People think they’re just trailers,” he said. “If they see it, I think they’ll realize the benefits” in terms of affordability and quality. 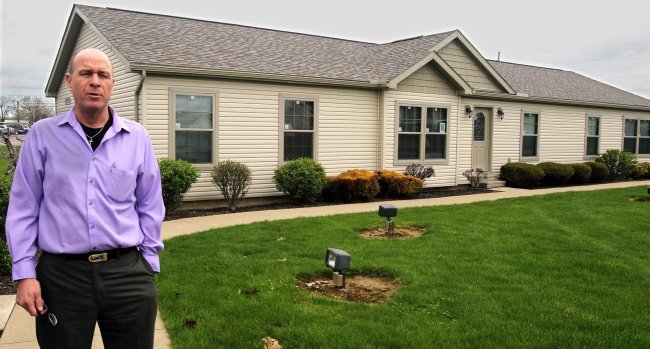 Dave Ball, sales manager with Hartzler’s Quality Housing, stands outside a Skyline modular home in New Philadelphia. (Akron Beacon Journal/MCT)
Koones said she became fascinated by factory-built housing when a friend had one built. One day Koones was watching the house go up on the site, and the next day her friend was inviting her to walk through the finished structure.

Koones believes the merits of building homes in factories are many. The environment is controlled, she said, so there are no weather delays or problems such as mold or warping from wood getting wet. The process saves time, because homes can be built quicker with assembly-line methods than they can on site, and because the foundation and structure can be built simultaneously. It saves money, because materials can be purchased in bulk and protected from job-site theft. And it’s more precise, because computer-controlled machinery and construction methods can be used that yield precise cuts and walls that are perfectly square.

But Koones’ favorite aspect of prefabricated housing is its sustainability. Houses built in factories often incorporate energy-saving features such as generous insulation and careful sealing, and construction waste is greatly reduced because unused materials are used in the next house or recycled, she said.

Yet many people still think factory-built housing is inferior. “This is like the best-kept secret in America,” Koones said.

Although factory-built homes are sometimes confused with mobile homes, they’re not the same. Mobile homes ― an outgrowth of travel trailers ― haven’t been made since 1976, when a set of federal construction and safety standards called the HUD Code took effect.

Factory-built homes are often made from two or more sections that are transported to the home site and joined together there. But the number of sections is limited only by the manufacturer’s capacity to produce them. Even mansions are built from factory-made modules, Koones pointed out.

The show in Green is intended to promote two types of factory-built housing, manufactured homes and modular homes. The two are very similar, but because manufactured homes don’t have to be permanently situated, those are the only kind that will be on display.

The difference between those two types lies in the base they rest atop and the construction standards they must meet.

Both are built on steel frames, enabling them to be transported from the factory to the home site ― often in sections that are joined on the site. But a modular home is lifted off the frame and set on a permanent foundation, whereas with a manufactured home, the frame remains part of the structure.

Manufactured homes are built to the standards of the HUD code, whereas a modular home has to meet the state or local building code governing its permanent site.

That’s pretty much where the difference ends, said Ed Hartzler, owner of Hartzler’s Quality Housing, a factory-built home dealership in Dover Township, Ohio. “If you walk in the interior of them,” he said, “you couldn’t tell the difference.”

Forget about plain facades and ugly features like the old vinyl-covered gypsum wall panels that were once common in factory-built homes. In today’s homes, the interior walls usually are covered with drywall, and details such as tray ceilings and dormers may be added, the promoters said.

Factory-built homes are created with standard construction methods, but unlike site-built homes, they’re constructed from the inside out, noted Bob Van Schuyver, Ohio, regional manager of UMH Properties Inc., which owns and operates manufactured home communities in seven states.

A recent tour of the Skyline Homes factory in Sugarcreek, Ohio, showed what Van Schuyver meant.

The construction process starts with the floor of each house section, which is built as an insulated component with all the ductwork and plumbing lines in place. Once the floor goes onto the steel frame, the various sections of the house are joined together, and the house is built as one unit for the rest of the construction process. That way, even though the house is split into sections for shipping, all the parts will fit together perfectly when they’re rejoined on the house site, said Jim Gallagher, division sales manager for Skyline Homes.

The house moves from station to station, where elements such as interior walls, plumbing fixtures and kitchen cabinets are installed. At the same time the exterior walls are going up and the roof is being installed, work such as installing drywall and running electrical lines is going on inside the house.

The exterior walls of some of Skyline’s homes are built with 2-by-6 studs, which creates a deeper wall with more space for insulation than construction using 2-by-4s, Gallagher said, Metal straps reinforce the frame to help it withstand storms.

Interior walls are built on tables using a jig, so everything is square, he said.

By the time the house leaves the factory, the walls have been painted, the flooring has been laid, and even the draperies and blinds have been installed. The only things left unfinished are the ends of the house, and that’s so the siding can be installed on the permanent site to cover the seam between house sections, Gallagher explained.

Once the house arrives on the home site, it usually takes about two weeks of finishing work before it’s ready to move in, Hartzler said. Gallagher said it might take six weeks altogether from the time a house is ordered until it’s ready for occupancy.

A factory-built home costs about $42 a square foot, Williams said. Nationally, construction costs for site-built homes averaged $95 a square foot in 2013, according to the National Association of Home Builders.

Koones said she believes it all adds up to value.

“I think this is the future of home building,” she said.