Instead, streets are up to 50 meters wide, lined with buildings with perfect symmetry. They are among major features of socialist architecture.

Architecture in North Korea is little known to the world. North Korean architects have been out of the spotlight, as they are not considered as individual, independent artists, but workers who follow “Kim Jong-il’s Architectural Theory,” a set of architecture guidelines drawn up by the late North Korean leader. 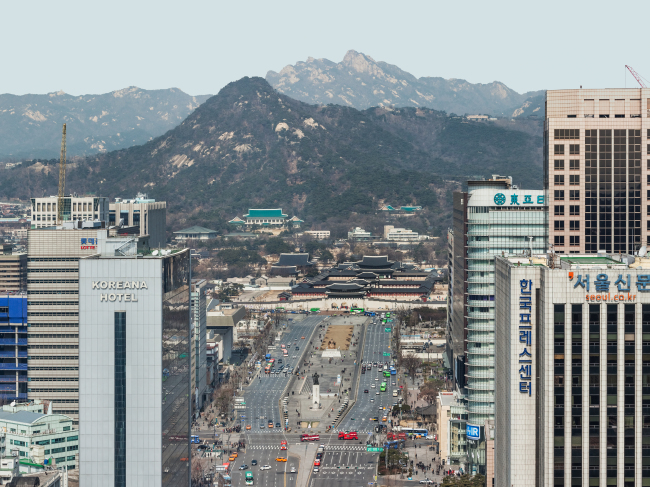 Cho’s initial plan was to invite North Korean architects to hold a joint exhibition for the architecture biennale. But it wasn’t an easy task to bring them out to the international architectural scene.

In June 2013, the first official letter proposing a joint architecture exhibition was sent via the North Korean ambassador in Austria, who were introduced by an Austrian museum director to the exhibition organizers. Since then, many letters have been sent through those who have a link to North Korean officials and architectural groups there.

Cho received some positive responses from two major architectural groups ― the Baekdusan Architecture Research and the Joseon Architect Association. But there weren’t any replies after that.

In the end, the ambitious plan to hold a joint exhibition with North Korean architects didn’t materialize. 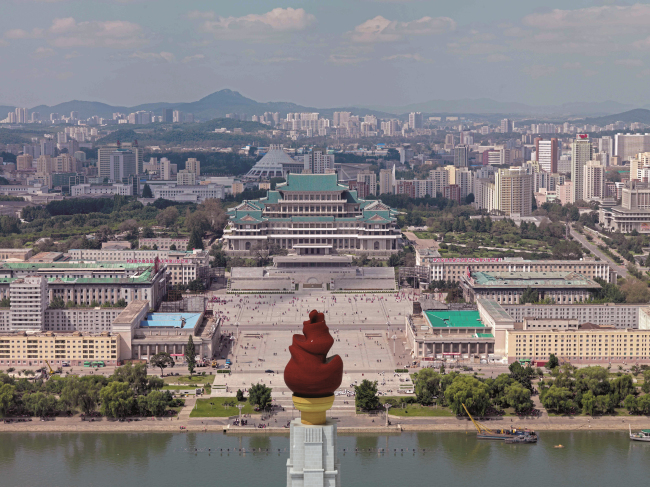 “Kim Il-sung Square, Pyongyang” by Philipp Meuser. (Philipp Meuser)
“We decided to go for Plan B,” Cho said in the press conference held on Monday to announce an exhibition plan for the Venice Architecture Biennale. “It was a challenge for us to put together the joint exhibition, since we had no contact with North Korean architectural circles.”

Cho and three other curators began to collect photographs, paintings and sketches that offered a glimpse into North Korean architecture. The materials borrowed from foreign architects, artists and collectors have become a great archive for the exhibition. Prominent works include photographs of buildings in Pyongyang taken by German architect Philipp Meuser and North Korean paintings and propaganda posters collected by Nick Bonner, a British businessman who runs a travel agency in Beijing that takes tourists into the North.

The exhibition is divided into four parts, each of which explores the different stages of postwar architectural development in the Koreas. The first part, “Reconstructing Life,” looks at how two capitals were rebuilt after the war. The North Korean capital of Pyongyang, 90 percent of whose structures were destroyed, adopted a master plan for reconstruction, drawn up by legendary architect Kim Jong-hee.

Seoul, less damaged by the war than Pyongyang, was driven by the goal to create a flourishing society based on a free economy. But the roles of architects of both countries are said to have been limited ― by strict state control in the North and by the influence of bureaucracy and capitalism in the South.

An interesting comparison of North and South Koreas has been made between two monumental modern architectural projects: The Sewoon shopping complex in Seoul, and the Koryo Hotel in Pyongyang.

The Korean exhibition “Crow’s Eye View: The Korean Peninsula” will run from June 7 to Nov. 23 at the Venice Architecture Biennale.