[ The Korea Herald – Send E-mail ]
[Herald Interview] Erasing brand barriers for the sake of shopping
Galleria MD director spills beans about surprise renovation that drove 33% sales jump
By Korea Herald
Published : May 13, 2014 - 20:48
Updated : May 13, 2014 - 20:48
When The Galleria Department Store in southern Seoul on March 13 tore down the barriers between different brands for the first time ahead of its bigger competitors Lotte or Shinsegae, industry insiders were puzzled.

Fashionable and contemporary designer garments, jeans, shoes, bags, hosiery, accessories and underwear were piled up in independent sections regardless of brand, making it difficult to tell which brand was which without careful observation. At the same time, the brand image of Galleria became more dominant.

This unprecedented move for the Korean department store industry has proved a success in less than two months.

According to the management, the renovated space, which covers the second through fifth floors of the West building, was increased by 33 percent between March 14 and April 30 compared to the same period last year.

It also had a spillover effect. The department store’s overall sales went up 10 percent and its premium supermarket Gourmet 494 saw a 50 percent rise. 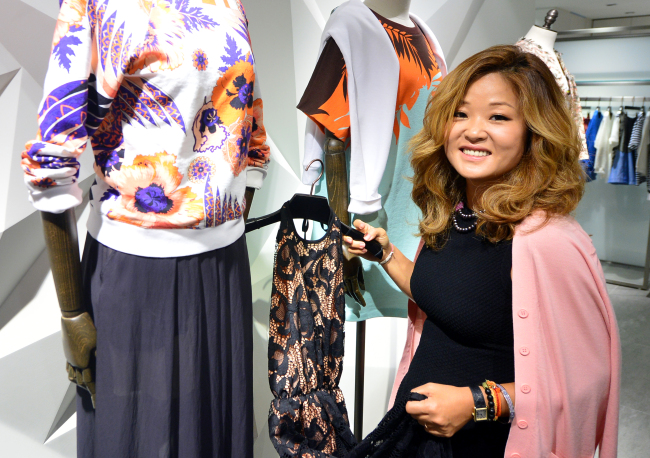 Colin, who used to work as a merchandiser for LVMH and fashion manager at Lane Crawford department store in Hong Kong, oversaw the renovation, from space decoration to merchandising and other aspects.

“Before, shoppers were bound by the brand names. But at The Galleria, it is the product that matters. This allows customers to have full control over what they buy,” she said. “They get to meet a lot of different, and sometimes unfamiliar, brands without having any prejudice. That makes their shopping much more exciting and valuable.”

This may have seemed new and unfamiliar for the brands, too, at first. But they have agreed that the trend, which originated in the U.S., U.K. and Hong Kong, will eventually work in Korea, Colin said.

Under the strategy, rather unknown brands in Korea such as Ilria Nistri, Elle Sasson, Henry & Belle, Christopher Kane and Carven have been introduced to Korean customers. “(The) case of Raf Simmons, a personal label of the Flemish designer who is also the creative director of Christian Dior, was a surprise success for us, too. It surpassed our expected sales by 50 percent. We believe that our approach has contributed to the good record,” Colin said.

‘‘But the true architect behind the renovation was the customers,” she added.

The store, located in the affluent Cheongdam-dong, has been the face of the Korean luxury market, frequented by fashion-savvy and rich globe-trotters known for their finicky tastes.

“The Galleria customers are always ahead of the trend and are looking for something new. They are insatiable in fashion and their choice,” Colin said, explaining why 40 out of 140 brands in the renovated section were presented for the first time in Korea.

The Galleria, the second-most visited department store in Seoul by foreigners, has also reinforced its marketing for foreign customers, who are mainly Chinese and Japanese. An exclusive lounge and concierge service are dedicated to foreign customers, helping improve their shopping experience as well as their overall stay in Korea.

“Many foreigners visit The Galleria hoping that they could see the global cutting-edge trends. From the line of flow to the background music, the lighting and the products, everything has been designed carefully to provide the best shopping environment. They won’t be disappointed,” Colin said.