[ The Korea Herald – Send E-mail ]
[Herald Interview] IoT boom in the offing
Cisco sees potential in Korean infrastructure
By Park Hyung-ki
Published : May 7, 2014 - 20:30
Updated : May 7, 2014 - 20:30
When Jim Clark, the Silicon Valley entrepreneur who started Netscape, set out to build his high-tech yacht called the Hyperion that could be controlled via sensors connected to a computer network, the market viewed his grand plan as no more than a dream.

But the idea that objects and solutions can be connected to and operated through wireless networks is becoming a reality, thanks in part to the emergence of mobile technology.

Further progress is needed to prepare for the Internet of Things and eventually the Internet of Everything, as Cisco Systems, the U.S.-based networking equipment giant, said sensor technology will have to be improved and applied to big data analytics.

“The IoT (era) would not come without the advancement of sensors,” K.W. Chong, general manager and vice president of Cisco Systems Korea, said in a recent interview. 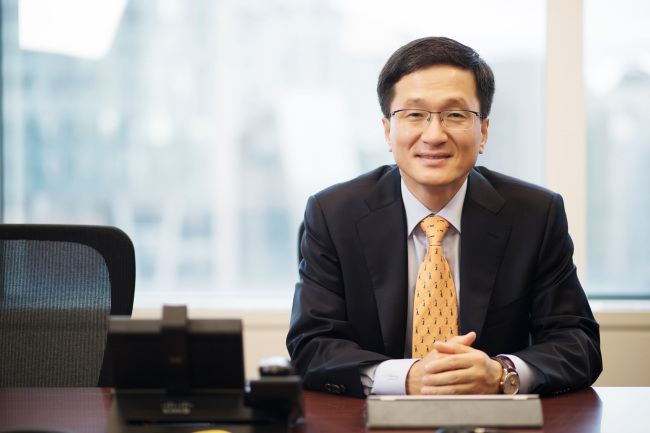 Cisco, which is developing its business capacity in the new field, defines IoE as “the integration of sensors and big data that can be processed in real time for customized action.”

Chong projected that the IoT industry will be formed following a “boom” led by tech ventures, like how the Web industry was created amid the dot-com hype in the late 1990s, triggered by Internet browsers such as Clark’s own Mosaic Netscape.

Mobile technology has further sped up the development of the IoT, which was introduced about a decade ago.

“Mobile, with the introduction of smartphones in 2007 (by Apple), has provided the catalyst for widespread connectivity,” he said.

Besides the expected widespread connection of consumer goods such as home appliances and automobiles, Korea’s public infrastructure will likely to be the first sector to adopt and widely use the technology.

With the country’s e-government system ranked among the world’s best by the United Nations Public Administration Network, Cisco forecast that Korea has the capability to create and use IoE solutions to change and improve the infrastructure landscape.

“We see the IoE to be used for smart cities, roads, parking lots, streetlights and apartments, as Korea has the foundation to develop basic (underlying) technologies.”

And other industries such as education, health care and retail will quickly follow to introduce their own connected world.

Cisco, which is currently developing a smart city project with POSCO Engineering & Construction in Songdo, Incheon, has 10 innovation centers around the world, focusing on IoE technology development.

For instance, its center in Germany mainly seeks to come up with new IoE-based manufacturing technologies, while the Korean center is aiming to financially and strategically back new tech ventures and SMEs that introduce and commercialize solutions for ubiquitous cities.

“We see them as valuable partners for the IoT-IoE ecosystem in the near future,” Chong said.