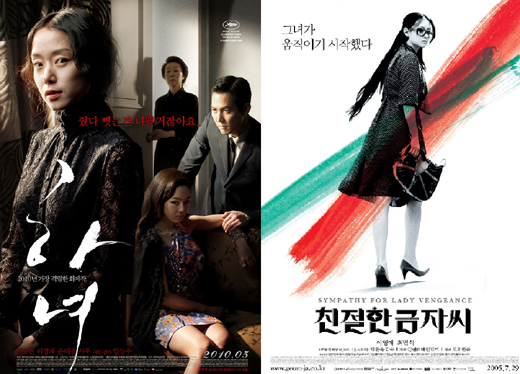 Two Korean movies, “Lady Vengeance (2005)” and “The Housemaid (2010),” are among the top 12 female vengeance films selected by the online edition of Time.

“We present a dozen movies, from Hollywood, France and South Korea, that treat the vengeful-woman theme with fondness or dread, as comedy, melodrama or stark tragedy,” the U.S. weekly magazine wrote on Tuesday.

“Lady Vengeance” was directed and cowritten by Park Chan-wook, who previously directed two other bloody vengeance films, “Sympathy for Mr. Vengeance (2002)” and “Oldboy (2003).” The success of film Oldboy added Park’s presence in the international film industry, as a representative figure of Korean vengeance movie.

Lee Geum-ja, played by actress Lee Young-ae, is the tragic heroine of Lady Vengeance. Her life begins to falter as she is convicted of murdering a schoolboy on behalf of a child serial killer, Baek (played by “Oldboy” star Choi Min-sik). Behind bars, she witnesses dehumanizing abuse between female prisoners. Released early as a model prisoner, she begins her new life as “lady vengeance” and sets off to get even with Baek who ruined the lives of many parents and hers.


The other Korean film, “The Housemaid,” was directed and written by Im Sang-woo. The movie is a remake of the eponymous 1960 flick by Kim Ki-young.

The movie starts off with Eun-yi (Jeon Do-yeon), a naive, working-class girl, being hired by a wealthy family. She gets pregnant by the attractive, control-obsessed patriarch, Hoon (played by Lee Jung-jae), but is forcibly taken to the hospital for an abortion by the dragon ladies of the aristocratic family.

Realizing that rich people only see the poor as their pawns, the frustrated heroine takes up one last act of vengeance.