[ The Korea Herald – Send E-mail ]
[Uniquely Korean] Street food evolves
By Lee Woo-young
Published : Apr 23, 2014 - 20:13
Updated : Apr 23, 2014 - 20:13
Kim Hee-sook and her husband came up with a recipe for a crispy sweet pancake, a variation of hotteok, a traditional Korean pancake stuffed with sugar, 18 years ago. They set up a food stall on a street in Insa-dong. Their hotteok made with corn starch and glutinous rice became an instant hit. It is now one of the must-taste street snacks in the popular tourist spot.

“Others started imitating us,” she said, constantly flipping the round, flat hotteok. Her hotteok is filled with a mix of up to 13 ingredients including sugar, black sesame and peanuts.

The Insa-dong street lined with antique shops and art galleries offers a glimpse into the evolution of Korean street food. Its reputation as a place of tradition and culture is partly owing to the diverse street snacks sold there. On weekends, visitors queue up to buy not only hotteok, but also tteokbokki (spicy rice cake), sundae (Korean blood sausage) and small walnut cakes

Recently, new items have been added. One of them is cane ice cream ― ice cream in cane-shaped puffed corn. Initially created by a ttakji (round comic card) gallery in August 2012, it has become a great success. Now most visitors to the gallery seem to be drawn more to the ice cream than the rare ttakjis. Visitors can enter the gallery for 3,000 won ($2.90), view a collection of old comic cards and get cane ice cream before exiting. 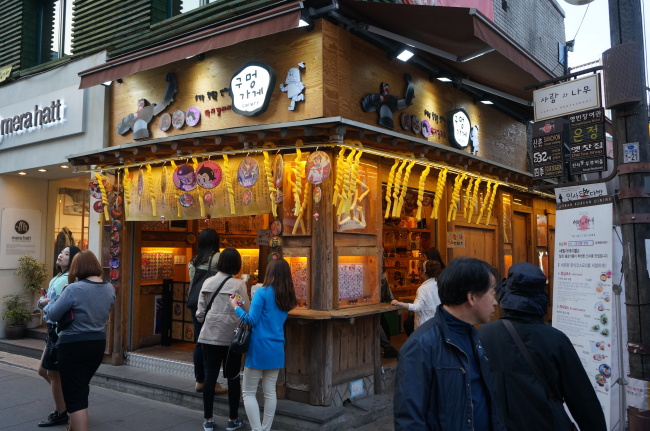 A ttakji (round comic card) gallery in Insa-dong, Seoul, hangs ice cream in cane-shaped corn puffs from its eaves. ( Lee Woo-young/The Korea Herald)
“People find it interesting because of its shape,” said Kim Sung-kyu, manager of Jun Factory, which runs the comic card gallery and a separate ice cream shop a few blocks away. The ice cream draws more than 1,000 foreigners as well as a large number of Koreans every day.

In Myeong-dong, the street snacks appear to be more creative and influenced by foreign foods. Skewered swirl-cut potato has become popular. A potato is cut in the form of a swirl, then skewered on a wood stick and deep-fried. It is served with cheese powder. Hotdogs covered in french fries are prompting curiosity for combining two popular American snacks.

Fruit sticks and fried chicken on skewers are similar to snacks enjoyed in Southeast Asian countries.

Facing competition from brand-new snacks influenced by foreign foods, traditional snacks sold on the streets for decades are being diversified. One of them is bungeoppang, fish-shaped waffles stuffed with sweet red bean paste. Bungeoppang have taken different shapes, and some vendors stuff them with different ingredients.

Bungeoppang is known to have originated from the Japanese fish-shaped pancake taiyaki. According to “Bungeoppang Has a Family Tree,” written by Yoon Deok-no, bungeoppang is “a mix of waffles from the West and dumplings from the East.” It began with waffles modified by the Japanese after they were introduced to Japan in the 18th century. The book, published in 2011, traces the roots of more than 48 kinds of popular Korean street foods, including tteokbokki, sundae, hotteok and gimbap.

The greasy hotteok originated in the 1800s, when Korea opened its doors to foreign countries. The Chinese introduced the sweet pancake, which is evolved from oven-baked flatbread in Central Asia.