Yvo de Boer, former executive secretary of the U.N. Framework Convention on Climate Change, also expressed his resolve to remake the Seoul-based international organization that has taken flak for its lax budget and personnel management in recent years.

In an interview with The Korea Herald, the director general pinned high hopes on President Park Geun-hye’s vision of a creative economy, which he said is “very close” to the GGGI’s objective of building on innovation and human intelligence.

The initiative calls for creating new business opportunities, industries and jobs through a convergence of information and technology, culture and other sectors to jump-start the economy.

“Now we basically live in a society or on a planet where we’re running out of resources, people are getting older and older, and we need to create jobs in new, more intelligent ways,” de Boer said. 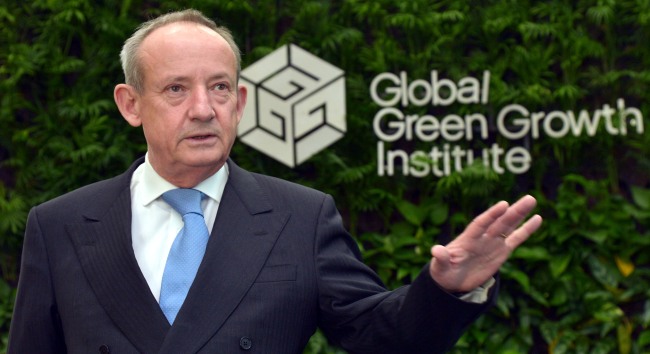 Yvo de Boer, director general of the Global Green Growth Institute. (Kim Myung-sub/The Korea Herald)
“I think for many developing countries the issue is how they can skip much of the industrialization phase that rich countries went through and immediately move to an economy which is much more modern and much more progressive.”

Take the example of telephones, he suggested. Unlike in the past when fiber-optic cables were installed nationwide, many developing countries skip the phase in favor of mobile phone technology, which also facilitates built-in banking and health care services.

“Similarly with energy, we’ve gone through the fossil fuel power generation era in industrialized countries. For many developing countries, the issue is how you can immediately leapfrog to more innovative, clean energy so once again you don’t have to put wires all over the country,” de Boer said.

“I’m very interested in the concept of the creative economy and how we align that with the work the GGGI has been doing.”

The Dutch environment expert took office last week, replacing Howard Bamsey, who returned to his native Australia to work as a professor after his one-year term. Prior to joining the GGGI, de Boer was global chairman of climate change and sustainability services at KPMG International, deputy director general at the Dutch Environment Ministry, vice chair of the U.N. Commission on Sustainable Development, and an adviser to the Chinese government and the World Bank.

The GGGI was launched in 2010 by the Korean government to bridge rich and poor countries by funding and sharing technological know-how for environmentally friendly development.

But the much-touted institution faced criticism in 2012 after the state auditor found it to have misused its finances such as for extravagant trips by its council chairman. The report prompted Norway to temporarily withhold its $10 million donations and Denmark to demand a stringent review.

Acknowledging what de Boer called a “troubled childhood,” he vowed the utmost efforts to prevent a relapse and ensure transparency.

“Every single point of criticism in the Korean audit report has been acted on, so in that sense the administration is fixed,” he said, adding that Norway, Denmark and some other countries offered a “positive” report after examining its projects in the field, and “defrosted” their contributions.

“So undeniably there had been problems in the past but I’m very confident about the steps that have been taken to correct that.”

As the U.N. climate chief, de Boer was at the vanguard of the fight for global warming from 2006-10.

Despite the prolonged standoff between rich and poor nations, he pledged to carry on his efforts, this time by demonstrating that green growth works, in partnership with GGGI members, the Seoul government and the private sector.

“So it is very much about showing countries that there is a different path that can be taken. What Korea has demonstrated in recent years through green growth provides an interesting example to other countries, and many countries are interested in learning from the example.”