[ The Korea Herald – Send E-mail ]
[Herald Interview] Technology innovation leads future of Korean agriculture
By Korea Herald
Published : Mar 28, 2014 - 21:35
Updated : Mar 28, 2014 - 21:35
Gone are the days when urban farming was an arcadian ideal, a hobby for city slickers or a pursuit of self-subsistence communes. It is high time to harness its industrial potential to cope with a growing threat to food security and increasingly fierce competition in agriculture, said Kim Jae-soo, president and CEO of Korea Agro-Fisheries and Food Trade Corp.

“Agriculture doesn’t take place in farmlands anymore. Vertical farming converged with various state-of-the-art technologies will be a new paradigm for the next generation,” said Kim, a leading promoter of urban farming, in an interview with The Korea Herald.

For the industrialization of urban agriculture, state support and business investment are crucial, he added. 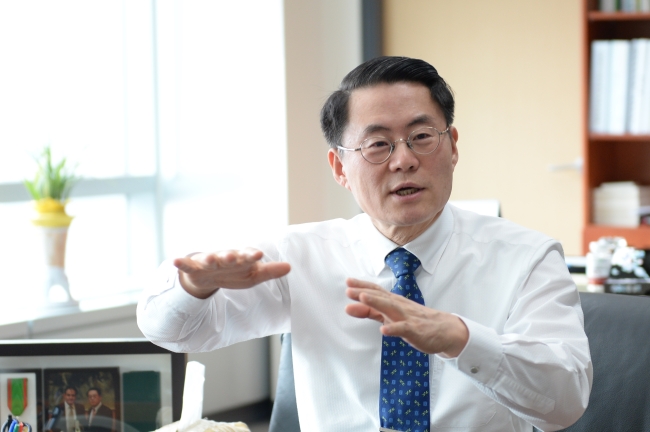 aT CEO Kim Jae-soo
While the interest in urban farming is growing across the nation, vertical farming ― the cultivation of indoor crops by artificially supplying air, water, light and minerals, and controlling the necessary conditions ― is receiving greater attention as a feasible solution to potential food shortages and agriculture-driven pollution.

But Kim stresses that vertical farming not only can help us grow safe local food but also produce high-value-added businesses, leading to the industrialization of urban farming.

“The industrialization of vertical farming is feasible. All kinds of technologies can come together such as bio, nano, information and even cultural technology in 24-hour, factory-like vertical farms in the city center,” he said.

The renowned agriculture expert who recently authored “The Counterattack of Agriculture” suggested creating a standard model of an urban farming plant to export to foreign countries.

“Once a standard form is settled, it can be used anywhere, such as under the sea or even in space.”

Working as the administrator of the Rural Development Administration in 2009 for about two years, Kim launched the first urban farming task force in the government organization to expand research and development for urban agriculture in Korea.

In 2010, Kim built an urban farming factory and sent it to King Sejong Station, a state-run research base in the western part of the Antarctic, to help researchers obtain green vegetables in a place where it is often minus 55 degrees Celsius.

The central government only began to encourage and subsidize urban farming after the urban agriculture development law was enacted in 2012. Kim believes that more support should be provided for the growth of urban farming.

“Korea’s seed cultivation technology is undoubtedly No. 1 in the world. But its overall agriculture technology is just above average. More cooperation between different fields and better technology convergence are necessary based on ample public investment,” the CEO said.

Kim stresses that it is crucial to study how to achieve mass production with vertical farming so prices can be lowered. Indoor farming costs 17 times more than outdoor cultivation due to the use of complex technologies, he said.

“The higher cost means higher prices. Making urban farming products affordable for customers will be the next assignment for us.”

For his commitment to agricultural development, Kim received an award from the French agriculture ministry in 2012. A year later, Dec. 20 was recognized as “Jae Soo Kim Day” in a district of New York by U.S. Rep. Charles B. Rangel.