[ The Korea Herald – Send E-mail ]
Pakistani woman out to educate children
By Yoon Min-sik
Published : Mar 13, 2014 - 20:53
Updated : Mar 13, 2014 - 20:53
KARACHI, Pakistan (AP) ― Humaira Bachal knows firsthand how lack of education hurts her community. She had a cousin that died because his mother couldn’t read the expiration date on a bottle of medicine. She knows women in her neighborhood who died giving birth at home because their families didn’t know to send them to the hospital.

“These things are breaking my heart and every time I am raising the question ‘Why are people doing this?’” said the 26-year-old Bachal. “Maybe when my people are educated these problems would be reduced.”

So at the age of 13, she began teaching other girls what she learned in school. Those classes at home between friends grew into her life’s work ― bringing education to children in the working-class Muwach Goth neighborhood on the outskirts of Pakistan’s port city of Karachi, where families often keep their girls out of school and where even boys struggle to get decent learning. 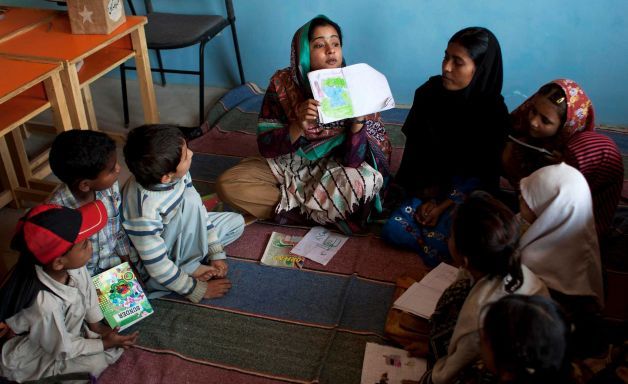 Educator Humaira Bachal shows an illustration to students in Karachi, Pakistan. (AP)
Through hard work and a sweet-but-stubborn attitude, Bachal has gone from a teenager who hid her schoolbooks from her father, who opposed her education, to running a foundation that teaches 1,200 boys and girls at her Dream Model Street School. Hers is a story about the power of one woman to change not only her own future but the future of people around her ― even in a society like Pakistan where entrenched rules restrict women’s ability to affect change.

With help from domestic and international donations ― Madonna has given money ― the foundation is building a new 18-room home for the school, which has grown to 33 teachers. It will be a massive improvement from their current site, a rented one-level, cinder-block building where curtains divide the classrooms.

Like many in Pakistan’s poor communities, Bachal’s family didn’t want to educate their daughter. She finished primary school, but her father forbade her to continue, preferring his eldest daughter get married.

With her mother’s help she studied in secret, hiding her school uniform and books at a friend’s house. This went on for nine months until a day of reckoning she remembers as one of the most important of her life.

She was preparing to go to school for a test, but her father came home early and questioned where she was going. When he discovered she had been secretly going to school, he was livid and slapped her cheek. A showdown ensued between her parents with her father beating her mother and her mother defiantly telling Bachal to go to school.

“I just ran from the house and went to the school and did my exams. I was worried about my father beating my mother. I didn’t know what was happening in my home,” she said.

Eventually her father agreed to let her continue her education as long as she married whomever he chose. She has yet to marry but she certainly pursued her studies. She graduated from high school, got a bachelor’s degree, is studying for her master’s, and learned English.

Her dedication draws comparisons to 16-year-old Malala Yousafzai, a Pakistani girls’ education proponent who survived being shot in the head by a Taliban gunman in 2012. Bachal said she hasn’t faced any violence, just stiff resistance from community elders.

She started out at 13, with help from her younger sister Tahira, with a makeshift classroom in her house, teaching about 10 of her girlfriends who were not able to go to school. Within two years, she had moved her now-150 students, Tahira and three other girls who had joined as teachers into a rented building.

At the same time, she lobbied families in her neighborhood to send their children to school although the reception wasn’t always great. She said local elders asked her family to move, saying they weren’t a good influence.

“The community is made up of laborers and people who are non-skilled workers. So she’s had to convince them why education is important to begin with,” said Academy Award-winning Pakistani filmmaker Sharmeen Obaid-Chinoy, who’s made a film about Bachal’s school. “Here are people who have 8 or 10 children, and they want their children to work.”

Many students at Bachal’s school and their parents say she personally visited their families to convince them. And many of the mothers are sending their daughters there over the opposition of the men in their families.

“I thought it might be God’s help that she came to the door,” said Salma Haji, a teacher who volunteered to help at the school after Bachal visited her home and who takes teacher training courses with the foundation.

One parent, Ashraf Khattoon, said her father and uncle taunt her for getting her daughters an education, insisting instead they should marry.

But Khattoon wants her daughters to be “civilized” and “not like me, I am illiterate.”

Bachal’s sister Tahira, who is studying accounting, is the principal of the Dream Model Street School. The Dream Foundation, which Bachal heads, runs the school and offers mentoring programs, health screening for students and teacher training.

A government-run school just a short drive away vividly shows the dismal state of education in Pakistan. The two-story building looks abandoned, with no windows or furniture and no doors on the bathroom stalls. After class, the teacher rolls up the carpet from the concrete floor and stores it at the factory across the street so it won’t get stolen.

By contrast, the new building under construction for the Dream Model Street School is an oasis of color and order. One floor has already been completed. Students sit on chairs at desks in classrooms with walls plastered with teaching aids describing vowels or endangered animals. There are separate toilets for boys and girls.

Bachal tries to employ modern teaching techniques instead of the rote memorization prevalent in Pakistan. Boys and girls attend classes together, even in upper grades, which are often segregated in Pakistan.

Her father has come around to her project ― and one of her three elder step-brothers sends his kids to her school.

She doesn’t necessarily think she’s won over everyone, but she’s worn them down.

“Some people don’t like what I’m doing but there’s a way to convey the message to these kinds of people,” she said.

Her next dream? Building a university.