The downscaled garden created by Korean designer Hwang Ji-hae features imitations of plants that grow naturally only on Dokdo and its nearest island of Ulleungdo in the East Sea. The artwork of indigenous Korean flora was presented to emphasize Korean sovereignty over the islet, which Japan also claims as Takeshima, according to the designer. 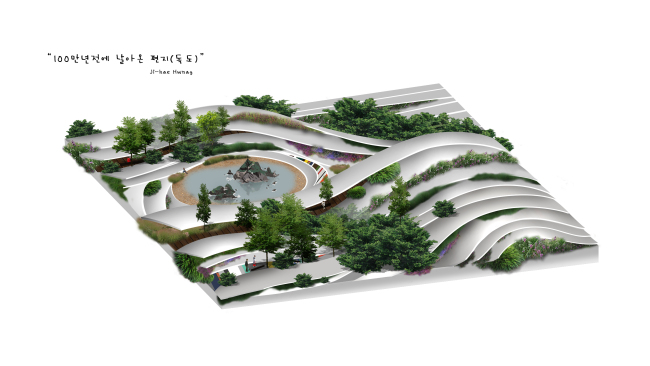 A computer-generated image of the Dokdo-themed miniature garden “A Letter Posted One Million Years Ago” by garden designer Hwang Ji-hae. (Hwang Ji-hae)
Entitled “A Letter Posted One Million Years Ago,” the garden’s foundation is based on slanted platforms that are a metaphor for sea waves. Trees and flowers planted along the gaps between the platforms constitute the overall landscape of the miniature garden, which resembles an urban park. A pond in the middle of the garden holds the rocky islet of Dokdo.

“The island of Dokdo is home not just to migratory birds, but also to wild flowers and plants. Some of them exist only on the tiny island. Dokdo is not only beautiful and magnificent but also possesses the mysterious markings of the passage of time and the law of nature,” Hwang said. 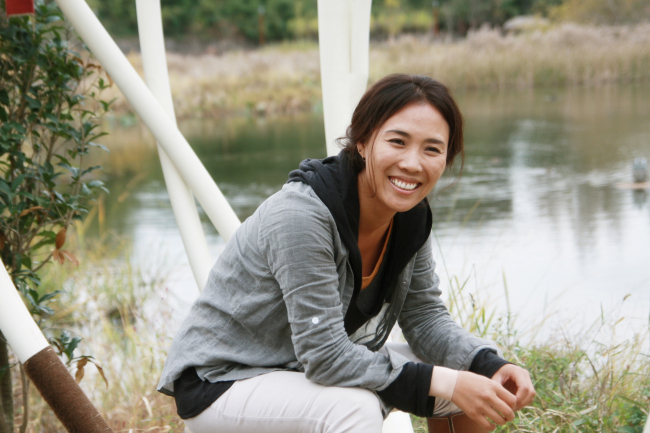 Garden designer Hwang Ji-hae
“Waves in my design are a metaphor for the meaning of life in a sense that they are not fixed but move constantly. I designed the waves with 3-D printing.”

Her garden design and works by other invited designers, which were exhibited last week in London, were created using the modeling technologies of Hobs 3-D, a U.K.-based 3-D printing company.

She is the only Asian among the 10 garden designers who participated in the miniature garden show, including John Brookes, an acclaimed British garden designer.

Hwang’s Dokdo-themed garden exhibition will move to the Netherlands, Sweden, Singapore, Sydney, Tokyo, Denver and New Delhi, India, this year. It will also be presented at the Singapore Garden Festival from Aug. 16-24 and at the Australian Garden Show in Sydney from Sept. 4-7.

She received spotlight with her DMZ-themed garden presentation at the Chelsea Flower Show in 2012, one of the most prestigious garden exhibits. She won the President’s Award for the garden design depicting the tension and conflict in the Demilitarized Zone on the border between South and North Korea.

In 2011, she won a gold medal and top award with her Korean toilet-themed garden “Hae Woo So: Emptying Your Mind” at the Chelsea Flower Show.