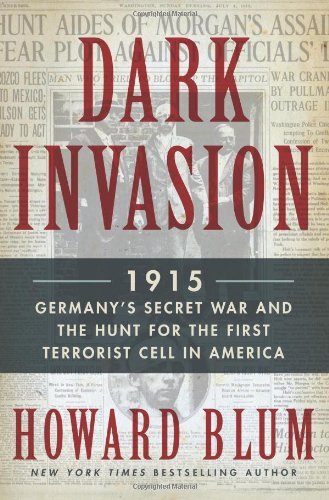 Dark Invasion: 1915: Germany’s Secret War and the Hunt for the First Terrorist Cell in America
By Howard Blum
(HarperCollins)


History is all about retelling tales that need telling. In “Dark Invasion,” Howard Blum has rescued a batch of compelling ones and woven them into grim, fascinating remembrance.

How many recall Frank Holt, aka Erich Muenter? This adoptive son of Dallas was a bird as strange as Lee Harvey Oswald.

Outwardly, he was a professor of German, married to the daughter of a Dallas Methodist minister.

Behind the facade, Frank Holt was a fanatic in the clandestine service of the Imperial German government.

Over the July 4th weekend of 1915, Holt bombed the U.S. Capitol, took the train to Long Island and put two bullets into J.P. Morgan. Arrested at the scene of his attempted murder, Holt fed police tantalizing clues about his past as a Harvard professor who poisoned his wife, about hundreds of missing sticks of dynamite and about another mysterious act of espionage soon to occur.

And then Holt was dead. At first, it seemed to New York’s counterterrorism police team that an assassin had silenced him in his jail cell with two bullets in the head. But the authorities on the scene decided Holt had climbed the bars and jumped face-first to his death on the concrete floor.

Howard Blum brings Frank Holt back to life in this history of German espionage. Abteilung IIIB, as its clandestine service was called, wanted to halt U.S. support for Britain and France in the first years of World War I. German agents twice tried to inspire an invasion of Texas from Mexico. They built a bomb factory aboard a German vessel interned in Hoboken, N.J., and set fire to dozens of ships crossing the Atlantic.

They used anthrax and glanders, another lethal microbe, to try to unleash a plague among the millions of American horses destined for Europe. They leveled the country’s largest munitions factory on July 30, 1916. More than 50 people died in the explosions at New Jersey’s Black Tom plant.

The espionage campaign was run out of New York City, and the city’s police bomb squad, led by Capt. Tom Tunney, led the fight against it. Much of the book is told from Tunney’s perspective, and Blum had good material in Tunney’s long-forgotten memoirs.

Despite all this provocation, President Woodrow Wilson apparently did his best to ignore it. It fell to his closest adviser, “Colonel” Tom House, to deliver the evidence to the newspapers and to confront Wilson.

“Attempts will likely be made to blow up waterworks, electric lights and gas plants, subways and bridges in cities like New York,” House told the president.

Do not “oversimplify matters,” Wilson replied.

On Feb. 1, 1917, Germany declared unrestricted submarine warfare on all ships entering British, French and Italian waters. Then British intelligence intercepted a telegram from German Foreign Secretary Arthur Zimmermann to the German ambassador in Mexico proposing an alliance with Mexico and Japan in war against the United States.

Wilson went before Congress on April 2, 1917. “They filled our unsuspecting communities with vicious spies and conspirators and sought to corrupt the opinion of our people in their own behalf. ... They sought by violence to destroy our industries and arrest our commerce. ... What great nation in such circumstance would not have taken up arms?”