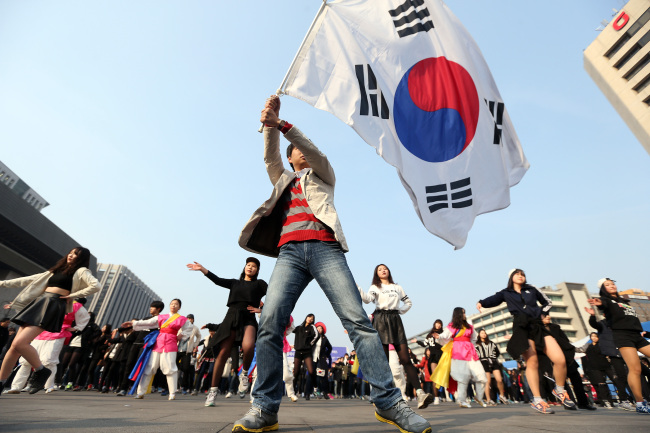 South Koreans stage a performance as part of their rally to call on Japan to scrap its annual celebration of Takeshima Day and bring more public attention to preserving Korea’s sovereignty over its easternmost islets of Dokdo, at Gwanghwamun Plaza in Seoul on Saturday. (Yonhap)
The deepening anti-Japanese sentiment is posing a major policy challenge to the Park Geun-hye administration under growing pressure from Washington to put aside historical disputes and forge forward-looking relations with Japan.

Hundreds of South Korean activists rallied in front of the Japanese Embassy in Seoul, decrying the event intended to step up Tokyo’s claim to Korea’s easternmost islets of Dokdo, called Takeshima in Japan.

President Park considers public sentiment a critical factor in formulating her policy as her political foes have disparaged her governing style, associating it with that of her late father, the iron-fisted ruler Park Chung-hee.

In recent weeks, Washington has urged Seoul to strive harder to mend fences with its onetime colonizer and forge a “future-oriented” relationship, while highlighting the need for three-way security cooperation against North Korean threats.

“While the U.S. obviously has a strong interest in the security relationship, it’s up to Japan and the Republic of Korea to put history behind them and move the relationship forward,” U.S. Secretary of State John Kerry said at a joint news conference earlier this month.

“It’s critical at the same time that we maintain robust trilateral cooperation particularly in the face of North Korea’s nuclear program.”

But “putting history behind” her is a Herculean task for Park as historical resentment toward Japan in such a vibrant democracy has limited actions of policymakers seeking practical ties with Tokyo.

With longer-term national interests in mind, Seoul has long sought to keep politics separate from issues of culture, economy and security. But the efforts have foundered as South Koreans look at all issues concerning Japan as “one package,” observers pointed out.

In 2012, Seoul and Tokyo sought to sign a bilateral military intelligence-sharing pact to lay the legal groundwork for enhanced security collaboration. But the signing was canceled due in large part to Koreans’ anti-Japanese sentiment.

“Democratically elected officials have to heed public attention, if even leadership means sometimes bucking popular sentiment to achieve a larger purpose,” said Patrick M. Cronin, senior director of the Asia Program at the Center for a New American Security.

“This is the situation President Park and Prime Minister (Shinzo) Abe of Japan are in: Both gain rather than lose popular support by taking a tough stance towards the other.”

Looking at Japan through the lens of their historical experience, Koreans have viewed any political and military moves by Japan with great suspicion.

Koreans have expressed concerns over Japan’s moves to eliminate the self-imposed stricture on the use of its Self-Defense Forces for collective self-defense and rewrite its war-renouncing constitution.

Although many analysts have pointed out that Japan’s pursuit of heavier armament is intended to keep an ascendant China in check during an intensifying territorial dispute, Koreans remain apprehensive that Japan could revert to its past militarism.

Koreans’ distrust toward Tokyo has been fueled by Japanese nationalists’ rhetoric and behavior that seemed to glorify, gloss over or whitewash its militaristic past. Hawkish leaders in Tokyo have sought to curtail “self-torturing” views in school history textbooks and inculcate patriotic values into Japanese youth.

The bilateral mistrust can only be addressed with Tokyo’s “sincere moves” to address bilateral history issues, Seoul’s Foreign Ministry said.

“Our stance is that it is Japan that should take sincere steps to address history disputes with Korea as it is Japan that created the disputes in the first place,” ministry spokesperson Cho Tai-young told reporters last week.

“By taking sincere actions and taking caution about what they say and how they behave, Japan should minimize the disputes.”

In case of a contingency on the peninsula, Japan is to play a vital role in providing rear-area support for the U.S. troops that would come to South Korea’s defense ― part of why Washington has sought a close security partnership with its two Asian allies Seoul and Tokyo.

“Secretary Kerry called advancing trilateral relations among Korea, Japan and the United States ‘vital.’ He is correct: the failure to be as well prepared as possible for a future North Korean provocation or attack would be tragic,” said Cronin of the CNAS.

Experts called on President Park to prioritize achieving Korea’s long-term strategic goals rather than sticking to the bygone era and caving in to public sentiment.

Hwang of Georgetown University said that while the Park government may legitimately feel that it is hampered or ‘handcuffed’ by strong public opinion that prevents her government from pursuing closer ties with Japan, Park must find a way to do so in order to further the country‘s national interests.

“Park and the Korean government must work to present compelling and persuasive arguments to the Korean people for why overcoming emotional distrust and hurt is far more important for the nation in the long run,” she said.

The expert added that Park may be negatively influenced by her father’s authoritarian legacy, but she could also take a lesson from what her father did for relations with Japan.

Park’s father signed the so-called normalization deal with Tokyo in 1965 despite huge domestic opposition. But the pact that entailed large financial compensations helped the country’s rapid economic rise after the devastation of the 1950-53 Korean War.