Traditionally, human society has depended on the consumption of depletable assets, such as oil and coal. Like the mice in the book “Who Moved My Cheese,” people have just kept on using the resources in the false belief that they will somehow last.

With side effects of economic growth such as the greenhouse effect, air pollution and resource depletion, experts are calling for an economic system that will achieve sustainable growth while tackling environmental issues. 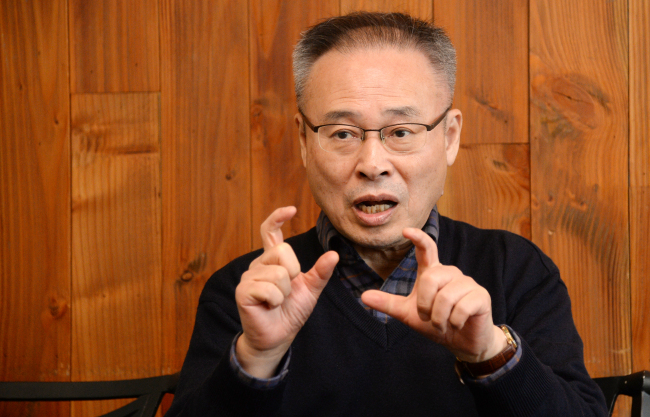 “Every life form on this planet has survived countless challenges against its existence,” Lee said. “If we make something based on the structure and function of that life form, it will not only be nature-friendly but also be economical. This is the premise behind blue technology, and having a blue economy means producing products and services based on that technology.”

The blue economy is a concept introduced by Belgian entrepreneur and author Gunter Pauli. In his book “The Blue Economy” Pauli suggested switching to the new economic model and take hints from the natural world, which already offers the means to solve the sustainability challenges faced by humans today.

The 69-year-old Lee, who heads the Convergence Institute, a local think tank, said that the idea behind blue economy is taking hints from the ecosystem to change the current economic system ― which is designed to just use up resources ― to one that allows sustainable development.

The natural life forms that survived billions of years of natural selection are in themselves the masters of survival, according to Lee. “Their mere existence is a testament to their competence,” he said.

Lee, who first coined the phrase “blue technology” in his book “Nature, the Great Mentor,” says he came up with the term to sum up biomimicry and bioinspiration, the two pillars of nature-based technology.

Why “blue”? Since the technology is about combining growth while preserving the Earth’s environment, he said it should refer to the color of our planet.

“From deep space, the Earth is nothing but a blue dot. This blue dot is the key to all this; it’s about saving our planet,” he said. “A blue economy based on blue technology to save our blue planet. That’s the whole idea.”

He said one of the most notable examples of a material that copies nature through biomimicry is the hook and loop fastener Velcro. It was invented in 1948 by Swiss electrical engineer George de Mestral, who got the idea for a hook and loop binding from the burdock seeds that kept sticking to his clothes.

According to Lee, the blue economy represents a paradigm shift from the existing “green economy,” the idea of achieving economic development while significantly reducing environmental risks.

The green economy focuses on precautionary or end-of-pipe technology to minimize the harm from pollutants that come from industrialization.

According to Pauli’s book, however, the green economy model requires companies and consumers to pay more while achieving less in order to preserve the environment, a tall order during an economic depression.

“While this was already a challenge during the heyday of economic growth, it is a solution that has little chance for success during an economic downturn,” he wrote in “Blue Economy.”

“The green economy, in spite of much goodwill and effort, has not achieved the viability so greatly desired.”

Pauli said the blue economy goes beyond mere preservation and addressed the issue of sustainability, stressing regeneration of resources rather than digging them up and using them.

“We might say that the blue economy is about ensuring that ecosystems can maintain their evolutionary path so that all can benefit from nature’s endless flow of creativity, adaptation and abundance,” he said.

The concept, while promising, is still relatively new, and although blue technology is actively researched in academic fields, the blue economy has yet to take off in Korea.

While the government’s main focus seems to be on information and communication technology, the ICT field is already being handled by global giants like Samsung. He said the government should take a long-term view and invest in things that are important but take years to pan out.

With a bit of a nudge, this economic system based on nature-based technologies can hit its stride. Lee said with proper support from the government, he and other researchers would be glad to work on a business model.

“What the scholars are saying is, ‘Let’s cultivate the (blue economy model) now to prepare for exhaustion of resources like petroleum.’ We should slowly move toward using natural energy sources,” Lee said.

He expects the process of shifting toward a nature-centered economy to take decades, and believes the government should take the lead in embracing the new paradigm.

“The change will not come overnight. If we don’t take the first step, a hundred years won’t amount to the slightest change.”