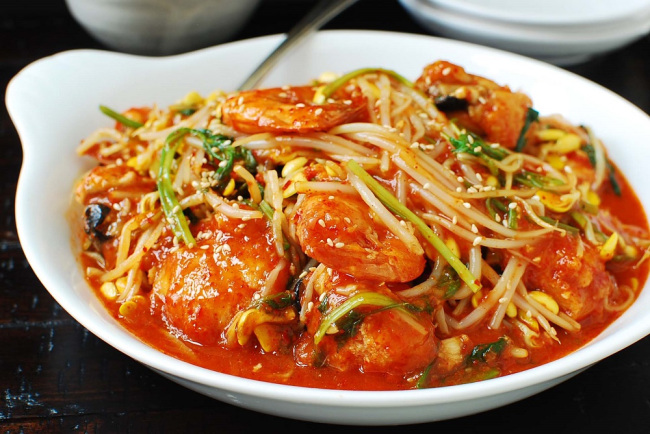 Agujjim (also called agwijjim) is a spicy fish dish made with agu (monkfish) and kongnamul (soybean sprouts). The dish originated from the southern coastal city of Masan. In the past, this not so good-looking fish wasn’t consumed as a food item in Korea due to its appearance. The story behind the birth of this dish is that some fishermen didn’t want to waste their catches, so they brought them to an eatery and asked the cook to make a tasty dish. That was in the 1960s. The dish is now enormously popular all over the country.

Monkfish is a firm, white fish with a texture similar to lobster meat. In America, it’s known as “poor man’s lobster.” We Koreans usually use bone-in and skin-on pieces, but fillets work as well. Agujjim typically includes mideodeok (sea squirts), but I used shrimp instead in this recipe. The soybean sprouts play an important supporting role in this dish. Cook the sprouts briefly, and plunge them into an ice bath immediately after. The crunchy bean sprouts nicely complement the tender, moist fish with bursts of spicy flavor!

● 60 grams minari or watercress, cut into 3 to 4 inch lengths

Clean and cut the fish into 5-centimeter pieces. Drain, and pat dry with a paper towel. Mix well with the salt and wine. Let it stand while preparing the other ingredients.

Combine all the seasoning ingredients.

Prepare a bowl with ice water. In a medium-size pot, bring 1 cup of water to a boil. Add the soybean sprouts, and cook, covered, for 2 minutes over high heat. Drain, and immediately immerse in the ice water. Drain again.

Heat a heavy, deep skillet. Add 1/2 cup of water and the fish, and cook, covered, over medium heat for 4 to 5 minutes. Flip the fish over halfway through the process.

Stir in the seasoning mix and the optional shrimp. Continue to cook, covered, for an additional 2 to 3 minutes, or until the fish is tender and the shrimp is cooked through.

Pour in the starch slurry, and stir well until the sauce thickens. Stir in the sesame oil and sesame seeds at the end. Serve with a bowl of rice.