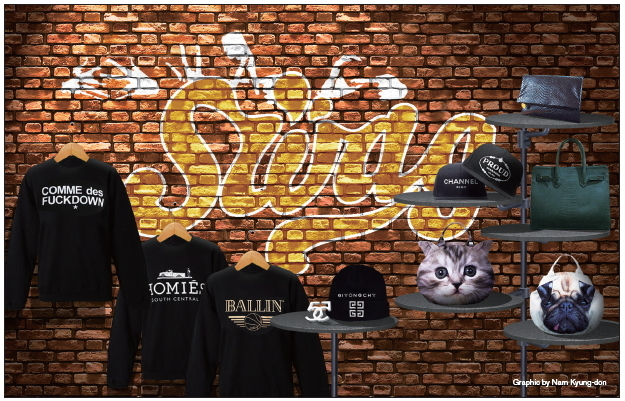 Graphic by Nam Kyung-don
The fashion industry has long been dominated by a black-and-white theory that only genuine articles from classic designer brands have value. Anything that’s a knockoff ― a “fake” ― was immediately dismissed as low-class.

This obsession with authentic designer products, however, was accompanied by a sense of snobbery, and those who found this repellent have gone the other way to advocate fakes and copycats.

The popularity of imitation brands in Korea has become such that people no longer seem to be shy or ashamed of wearing or carrying knockoffs.

This is the so-called “swag” trend.

Trendsetters are strutting the hippest neighborhoods in the country with canvas bags that are knockoffs of Hermes’ Birkin Bag, topped off with t-shirts or baseball caps that choose to spell Chanel as “Channel.”

Even the celebrities have joined in on the fun, as seen in G-Dragon’s fake Givenchy brand, “Giyongchy.”

And faux fur has gained renewed popularity as fashion houses are rushing to roll out fake fur clothes and accessories, claiming that it’s not just about the price, but about protecting the rights of animals.

There has always been imitation, but the recent swag trend contains an additional factor ― knockoffs are now considered an independent fashion style.

“Swag” is a slang term that originally meant “stolen goods” but can refer to showy accessories in modern colloquial English. Kim Nan-do, professor at Seoul National University and author of “Trend Korea 2014,” presented “swag” as one of the top 10 influential keywords in domestic consumer trends this year.

“The younger generation seem to favor swag, and think that the better-known designer brands go against the so-called swag spirit,” Kim said in his book.

“The swag phenomenon is about clinging to one’s original style and refusing to endorse conventional luxuries.”

Some designers and trendsetters have taken the further step of satirizing designer brands and their followers.

Among them is Brian Lichtenberg, a contemporary fashion designer who came up with a series of mock luxury brands such as Homies for Hermes, Ballin for Balmin, Bucci for Gucci, and Feline for Celine.

As his works gained fame, secondary copycats started to appear in the market and authorized distributors stressed the “genuineness” of their “swag goods.”

There may be disputes about the authenticity of these mock luxury goods but one thing is for sure ― that fun is a key factor of swag, or “fake fashion.”

This is demonstrated by Ginger, a casual bag and accessory brand which kicked off in Hong Kong back in 2007, specializing in 3-D printed nylon bags.

The Ginger Bag is widely known for its original series which, at a distance, look like the high-priced Birkin Bag by Hermes but are, in fact, nylon bags with realistic 3-D prints.

Unlike the source of their inspiration, however, these deceptive bags are mostly priced under 300,000 won ($282), which is an attractive factor for young consumers or those seeking a reasonably priced bag.

“The fun of it is that these bags do not pretend to be Hermes or whatever other models they may resemble,” said an official of Suwa United, the official importer of Ginger in Korea.

“Just like Andy Warhol’s Pop Art paintings, they describe a representative image, a classic leather bag in this case, but reproduce them in a fun way, instead of photocopying every detail.”

This is why those behind the Ginger Bag resent its nickname “fake Hermes,” saying that the bag is not about copying or mocking a specific brand or item.

“Our identity is in the advanced 3-D printing technology, which depicts objects in 3-D to make them appear real on a flat surface,” the Suwa official said.

She added that the bag has several features ― embossed leather, square shapes and solid buckles ― that embody the essential factors of a classic bag. This may be why it has reminded consumers of the prestigious Birkin Bag.

Refusing to stop with the nylon Birkins, Ginger moved on to launch animal-shaped bags and beach bags with 3-D prints. All of these bags are made out of cheap and practical materials such as nylon or fabric.

The rise of fake fashion is also attributable to the changing consumer trends that prioritize practicality over prestige.

This is how a novice bag brand named Jury came to rule in the affluent Gangnam and Bundang neighborhoods.

The Jury Bag, characterized by its large size, diverse colors, and synthetic leather, first kicked off in 2011 as a fashionable diaper bag, under the slogan “For Gorgeous Mama.”

It first gained recognition as a cheap alternative to costly bags but soon built up a reputation of its own, creating a “Jury Bag syndrome,” especially among mothers in their 30s and 40s.

Its top-selling models, too, look much like the representative models of Hermes or Louis Vuitton but the owner denied the copycat allegations.

“It is true that the design of the Jury Bag resembles those of the suggested luxurious brands but is not entirely the same,” said designer and CEO Jo Jury in an interview.

“My idea was not to imitate the luxury bags but to offer stylish but practical bags for mothers who find it difficult to carry around heavy or small-storage bags.”

The rise of practicality also benefited specialty retailers of private label apparel such as H&M, Zara, and Uniqlo.

The appreciation for artificial material was further boosted by the eco-friendly fashion movement, led by renowned designers like Stella McCartney, who has refused to use animal fur in her clothes since 2007.