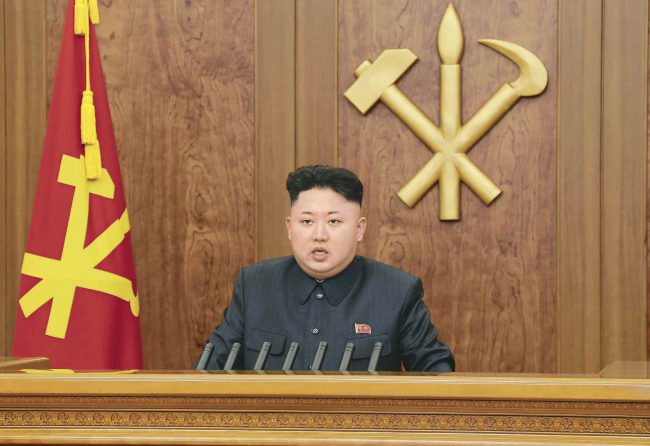 North Korea’s leader Kim Jong-un on Wednesday called on the two Koreas to work toward better relations and emphasized economic growth, raising cautious optimism amid escalated tension in the wake of the execution of his uncle.

In his second verbal New Year’s address as the communist state’s leader, Kim said it is “time to end aspersions that do no good,” urging Seoul to come forward to improve cross-border ties.

The remarks appear to contain relatively clearer reconciliatory signals than last year’s, which underscored the need for defused tension on the peninsula and efforts for unification.

“The South’s government must avoid waging reckless fratricidal confrontation, make no fuss about pro-North forces, heed the people’s voice calling for an independent, democratic unification, and come forward to improve its relations with the North,” Kim said during the 25-minute speech aired by the official Korean Central Television.

“We will move forward together with anyone who values the people and wishes (for) unification regardless of his past, and actively make efforts for the improvement of North-South relations.”

The young leader emphasized a robust economy buttressed by agriculture, construction and science as key to a “new leap into a strong, prosperous socialist nation” this year.

While last year’s speech focused on agriculture and light industries for economic development, the latest one singled out construction, fisheries and protection of underground resources and forests as core areas.

Kim did not explicitly refer to the nuclear program, though he vowed to maintain a “strong deterrent” against “external threats of a nuclear war.”

With economic revival being the most critical task at hand, the young commander-in-chief may try to mend ties with the Park Geun-hye administration for industrial cooperation and food handouts, analysts say.

“The atmosphere for inter-Korean dialogue may get relatively better as Kim placed stress on the enhancement of the relationship,” Cheong Seong-chang, a senior fellow at the independent Sejong Institute, said in his analysis.

“In the first half of the year, North Korea could propose reunions of separated families, which it unilaterally postponed last year, and call for a restart of tours to Mount Geumgang.”

But skepticism remains about the regime’s intentions given increasing uncertainty since the execution last month of Jang Song-thaek, Kim’s uncle and once powerful mentor.

The Swiss-educated Kim also raised hopes one year ago by highlighting the importance of reunification and an economic drive in his first New Year’s speech. Pyongyang, however, soon crushed such anticipations through an atomic test, nuclear threats and shutdown of a joint factory park in Gaeseong.

Indicating Jang’s purge, Kim said he has taken a “decisive step to remove factional filth,” helping to solidify the party and revolutionary line and strengthen unity.

“We should keep monitoring if the North changes tack as it continues to condemn the South, though the speech mentioned the need for the mood for improved inter-Korean relations,” Seoul’s Unification Ministry said in a statement.

Later in the day, Kim and his wife Ri Sol-ju visited the Kumsusan Palace of the Sun, which houses the embalmed bodies of his father Kim Jong-il and grandfather Kim Il-sung.