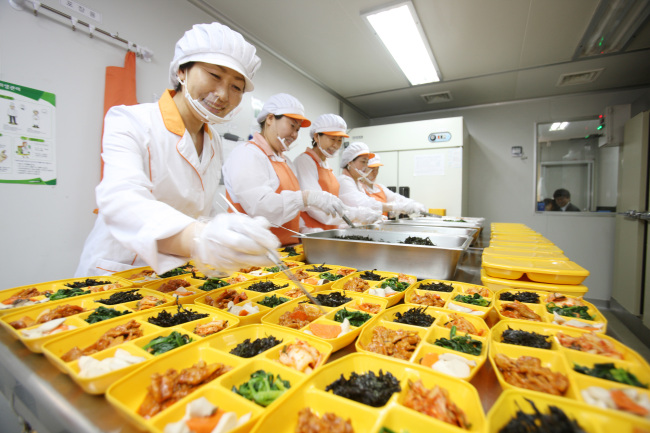 Participants in “Social Entrepreneur MBA” offered by SK Group take lessons on food business. SK Group is the country’s first conglomerate to launch a social enterprise funded by a single company. (SK Group)
Korean companies’ contributions to local communities are being diversified into unprecedented forms of philanthropy in step with a fast-paced change in technology.

The spectrum of philanthropic activities has widened from the simple and time-honored act of giving money or goods toward novel projects such as donating a power supply, funding social enterprises, and developing innovative electronic gadgets for the disabled.

Recipients are also more specified. Companies’ pro bono programs have been fine-tuned to meet specific needs. To name a few, programs are tailored to benefit the physically or mentally challenged, seniors living alone in poverty, low-income families and so on.

Samsung Electronics, the country’s largest electronics manufacturer, has combined technology and social contribution for “eyeCan,” a low-cost mouse controlled by eye motion, in 2012 for non-corporate use.

EyeCan was developed by five employees of Samsung Creative Development Center to help patients who suffer from Lou Gehrig’s and other paralyzing diseases which make them unable to use a hand-controlled mouse.

A Lou Gehrig’s disease patient uses “eyeCan,” a low-cost mouse controlled by eye movement that was developed by the Samsung Creative Development Center to increase accessibility to smart devices to those who have difficulty with mobility. (Samsung Electronics Co.)
“(EyeCan) was created to provide accessibility to smart devices to patients with such diseases by enabling them to control a computer mouse for affordable prices,” the company said.

A typical eye-controlled mouse cost about 10 million won when development began on the eyeCan. However, the new product is assembled with materials that cost as little as 50,000 won.

Social enterprises have emerged as a new keyword in the culture of corporate contributions. Social enterprises are organizations that apply commercial strategies to maximize improvements in human and environmental well-being, rather than maximizing profits for external shareholders. Separate from large companies’ financial support for them, the government has provided 160 billion won ($152 million) in subsidies to social enterprises this year.

EasyMove, best known for walking aids for seniors and the physically weak, along with strollers for disabled children, has marked steady growth amid stiff competition with rivals that crank out low-cost products in China and Taiwan.

The company expects its sales to surge 77 percent from 3.1 billion won last year to about 5.5 billion won.

The Korea East-West Power Co., a state-owned power supplier, carries out “Hatbit Nanum Hope Power Project.” It is a nationwide community service to install solar power generators near its power plants to provide electricity to those who can’t afford to pay their power bills.

“We thought that no one, at least any one living in the vicinity of our power plants, should be cut off from power supply just because they are too poor to pay even basic electricity fees,” the company said in a statement.

In 2012, the company constructed 20 solar power generators which can distribute about 3 kilowatts of electricity per household, in Dangjin City, South Chungcheong Province, and Ulsan Metropolitan City.

This year, it expanded the project to include social welfare centers. It set up generators in nursing homes in Ulsan and facilities for the mentally impaired in Dangjin in September and October. It completed generators in regional shelters for children in Donghae City, Gangwon Province, on Dec. 16.

KT&G, the country's largest tobacco manufacturer, takes pride in its unique fundraising system. Employees can post anecdotes about less fortunate neighbors on their online bulletin board to appeal for donations.

When a story receives more than 200 comments, the company’s charity review committee screens the article before deciding on a corporate-level donation.

The comment-and-donate system was launched in 2011. It is buttressed by the “Sangsang Fund” raised by employees who volunteer to give part of their salaries and its auxiliary program of rewarding employees’ voluntary service with additions to the fund.

An employee earns 10,000 won from the company for volunteering to fulfill one hour of community service, and the money is added to the Sangsang Fund.

This year, the company expects Sangsang Fund to swell to about 3 billion won.

“When you donate to a charity foundation, it is difficult to designate the recipient beforehand,” a KT&G spokesperson said. “Under our system, employees can decide on whom to help and then appeal for donations and they also can see how our donations help those in need,” she added.