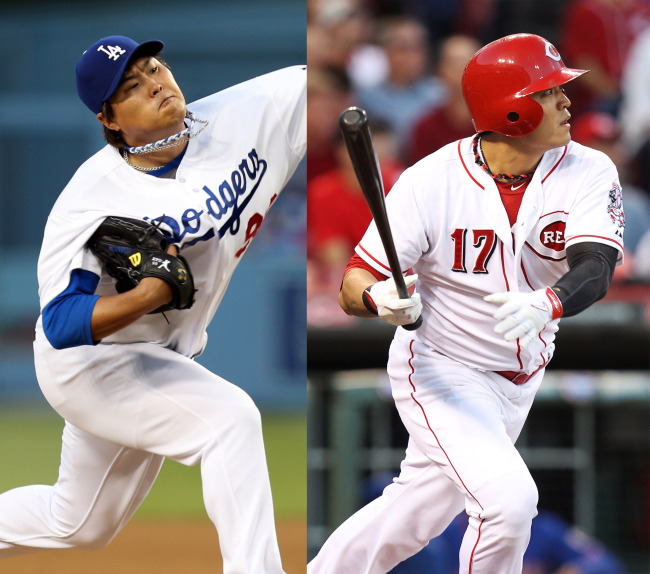 Ryu, the left-handed starter for the Major League Baseball (MLB) club, earned 51.4 percent of support in a poll conducted by Gallup Korea. The pollster surveyed 1,702 South Koreans aged 13 or older from Nov. 1 to 18. The voters could select up to two athletes.

Gallup Korea first carried out the athlete survey in 2005, and Ryu, ranked eighth last year, topped the list for the first time. In his first MLB season, Ryu went 14-8 with a 3.00 ERA. He also threw seven shutout innings against the St. Louis Cardinals in Game 3 of the National League Championship Series, becoming the first South Korean to earn a postseason victory in the big leagues.

The 26-year-old joined the Dodgers last December after spending seven years with the Hanwha Eagles in the Korea Baseball Organization (KBO). He is the first South Korean to jump directly from the KBO to the majors.

Figure skater Kim Yu-na came in second place behind Ryu with 35.2 percent. She captured her second career world championship in March in Canada, coming on the heels of a long hiatus from competition.

She won a minor competition, the Golden Spin of Zagreb in Croatia, earlier in December and looks primed to defend her Olympic gold medal at the Sochi Winter Games in next February.

Kim topped the annual survey in 2007, 2008 and 2009, and has never finished outside the top five in the past six years. Rhythmic gymnast Son Yeon-jae slipped from first to third this year at 24.9 percent. Veteran footballer Park Ji-sung ranked fourth at 18.8 percent, after rejoining his former Dutch club, PSV Eindhoven.

Son won the individual all-around title at the Asian championships in June and has long been a popular, omnipresent figure in television commercials. Park has been slowed by injuries but remains an iconic football star here.

Baseball outfielder Choo Shin-soo came in fifth place at 17 percent, after putting together the most productive season of his big league career with the Cincinnati Reds. He enjoyed his third-career 20-20 season with 21 home runs and 20 steals, while ranking among MLB leaders with 112 walks and a .423 on-base percentage, both career-highs.

As a free agent this winter, Choo is seeking a lucrative, multi-year deal.

There were four baseball stars inside the top 10, followed by three football players. (Yonhap news)