And why not? They were going to the Hall of Fame together.

With a combined eight World Series titles and more than 7,500 wins, the managerial trio made it to Cooperstown in results announced Monday. Each was unanimously selected when the 16 voters on the expansion era committee met a day earlier.

“They’re not the easiest guys to manage against, that’s for sure. But it was fun. It was always a battle,” Cox said Monday at the winter meetings. “And I consider them enemies on the field, but friends off the field.” 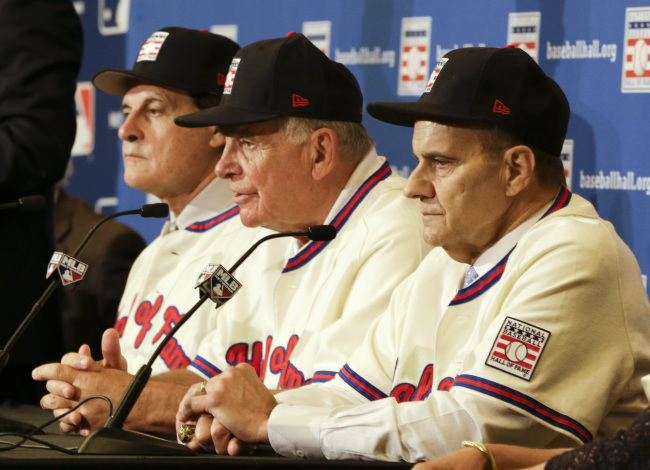 “Managing against them, you certainly learned things,” said Torre, now an executive vice president for Major League Baseball. “I am honored to go into the Hall with these two guys.”

Induction ceremonies will be held July 27 in Cooperstown, New York.

Candidates needed 12 votes for election. No one else on the 12-person ballot that included former players’ union head Marvin Miller and late New York Yankees owner George Steinbrenner got more than six votes.

Torre became the fifth manager to win four World Series championships, leading the Yankees to titles in 1996 and from 1998-00 ― beating Cox’s Braves twice. After making only one trip to the playoffs in 14 seasons with the New York Mets, St. Louis and Atlanta, Torre guided the Yankees to the postseason in all 12 of his years in New York with a cool, patient demeanor. His popularity rankled Steinbrenner.

“George Steinbrenner changed my life giving me that opportunity at the end of 1995,” said Torre, the seventh Yankees manager to be elected to the Hall. “He just wanted to win. He felt he owed it to the city. Maybe, the fact I was a New Yorker, it really struck a nerve with me.”