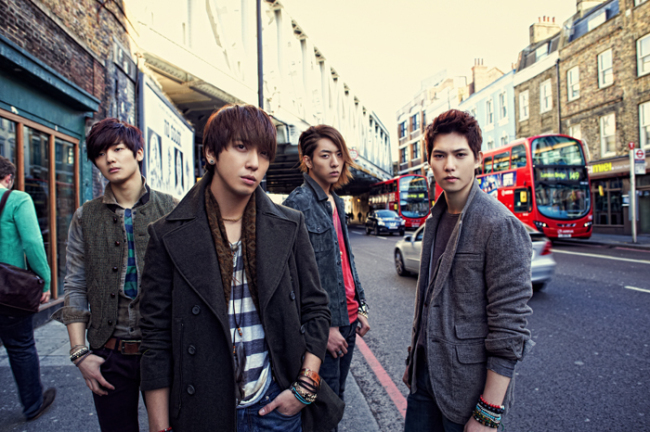 CNBLUE. (FNC Entertainment)
Idol band CNBLUE is set to embark on a Central and South American tour next month. The band will be the first K-pop artists to launch an extended tour in that part of the world. The tour will kick off on Jan. 26 in Mexico City’s Pepsi Center WTC in Mexico, and then move on to Parque del la Exposicion in Lima, Peru on Jan. 28, and Movistar Arena in Santiago, Chile on Jan. 31. Movistar Arena has hosted performances of world famous artists such as the Black Eyed Peas, Maroon 5, Jennifer Lopez and Bruno Mars. The four-member band performed in Chile previously for KBS’ “Music Bank,” which was held in the country last November.

CNBLUE is on its 2013 world concert tour, “Blue Moon Tour,” supporting the release of their fifth EP “Re:Blue.” The group has already performed in a variety of venues in countries such as Taiwan, Singapore, Hong Kong, China, Sydney and more.

The group is also set to perform in the first family concert for its label, FNC Entertainment, called, “2013 FNC Kingdom in Japan ― Fantastic & Crazy” on Dec. 28 and 29.