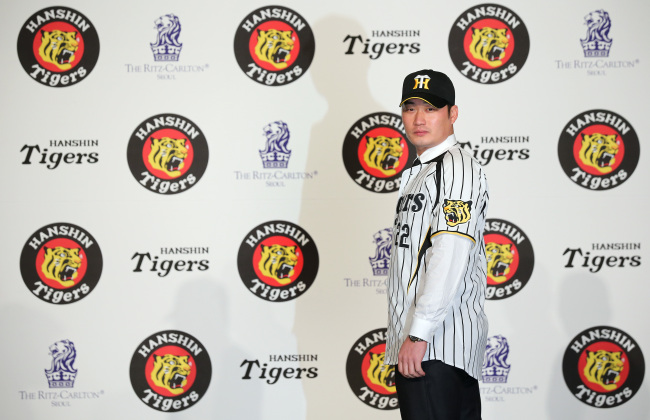 Oh was introduced as the newest member of the Nippon Professional Baseball club at a press conference in Seoul on Wednesday. He signed a two-year deal with the Tigers last month, leaving the Samsung Lions in the Korea Baseball Organization after spending nine seasons as the league’s most dominant closer.

Under an agreement between the two leagues, the Tigers also paid the Lions 50 million yen in a transfer fee for the right-hander, who is the KBO’s all-time leader in saves with 277.

As the first South Korean to play for the Tigers in the team’s 78-year history, Oh said he is more excited than daunted about taking on new challenges in a new environment.

“If I can concentrate on one pitch, one game at a time, I think good results will follow,” Oh said. “It’s an honor to be playing for such a historic club. I will try my best to become the best closer in Japan and help Hanshin win the championship.”

The Tigers last won the NPB’s Japan Series in 1985. To the title-starved Tigers, Oh brings an impressive championship pedigree.

In the regular season, Oh struck out 625 batters and walked 120 in 510 1/3 innings here, along with an ERA of 1.69. He led the KBO in saves in five different seasons, more than any other pitcher in the KBO’s 31-year history.

Oh declined to offer a specific number of saves he’d like to post in his inaugural NPB season, saying if he can minimize his mistakes, then the Tigers will also be in for a good season.

“The season hasn’t even started yet, so it’s hard for me to pick a number,” he said. “My biggest goal is to cut down on blown saves and preserve victories for our starting pitchers. If I can save a lot of games, then Hanshin will also have a good record.”

The Tigers will count on Oh to fill the void in the back end of the bullpen left by right-hander Kyuji Fujikawa, who signed with the Chicago Cubs in Major League Baseball last year.

Incidentally, Oh will wear the same No. 22 that Fujikawa had worn with the Tigers. Oh had worn No. 21 in the KBO, but with another player already wearing the number with Hanshin, Oh said he simply took what the Japanese team gave him.

The Korean, though, insisted he won’t pay too much attention to comparisons being made between himself and the Japanese star. “My job isn’t necessarily about trying to be better than Fujikawa,” said Oh. “First and foremost, I have to be myself and show people what I am capable of doing. It’d be great to break his saves record, but I am not here to talk about statistics or records.”