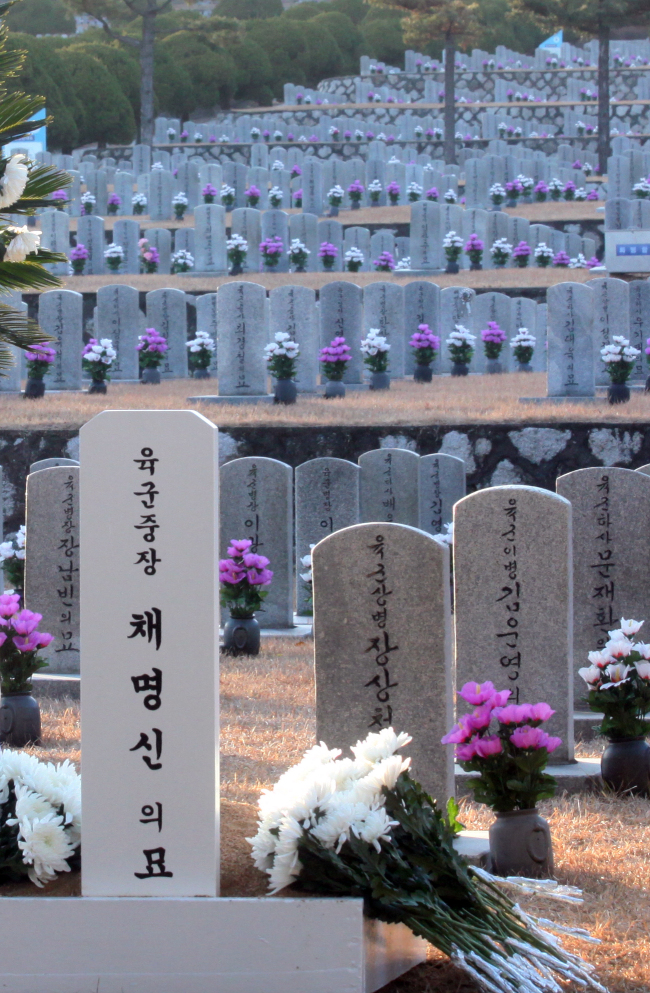 A temporary tombstone (front) of late Lt. Gen. Chae Myung-shin in a graveyard for enlisted soldiers killed in the Vietnam War in Seoul National Cemetery on Thursday (Yonhap News)
Retired Lt. Gen. Chae Myung-shin, the first commander of South Korean forces in the Vietnam War, was buried Thursday alongside enlisted soldiers killed in the conflict.

Chae died of chronic illness on Monday. He was 86.

Before his death, he told his family that he wanted to be buried in a cemetery for rank and file soldiers who fought in the Vietnam War. His funeral service was officiated by the Army chief of staff, and his ashes were laid to rest in Seoul National Cemetery.

It is the first time in the history of the Korean armed forces for a general to be entombed at a graveyard for ordinary soldiers.

As a retired three-star general who commanded troops in Vietnam from 1965-1969, his body could have been laid to rest in a 26.4-square-meter tomb. But he chose the smallest grave option (3.3 square meters).

“The war hero who fought in the Korean War and the Vietnam War set a good example of a leader’s love for his subordinates. He defended the country before his death and showed a spirit of camaraderie after his death,” an Army officer said.

“My husband habitually said, ‘I want to be buried with my comrades in arms,’” said his wife, Moon Jeong-in, 84.

According to one of his aides, Chae visited the cemetery on many occasions and cried at the tombs of his men who died in the Vietnam War.

The funeral portrait of Lt. Gen. Chae Myung-shin
Chae is known as a soldier of integrity who did not make much of protocol. He did not demand special treatment whenever he visited the ministry on business or for lectures as a retired general, Defense Ministry officials said.

However, his will almost failed to be honored. The ministry and the cemetery strongly opposed his wish to be buried alongside the enlisted men, saying it would be disrespectful to generals and that there was no precedent. Three days before his death, Moon wrote a letter to Cheong Wa Dae asking them to respect his will. The presidential office accepted her request Wednesday.

Chae was a close aide to the late President Park Chung-hee. He joined Park’s May 16, 1961 coup as commander of the 5th Division. But he opposed Park’s 1972 successful push to set up a dictatorial regime, and failed to be promoted to general, retiring as a lieutenant general that year. After being discharged, he served as ambassador to Sweden, Greece and Brazil.

He was awarded a number of orders of military merit in recognition of his military service, including such high honors as the Taegeuk and Hwarang orders.