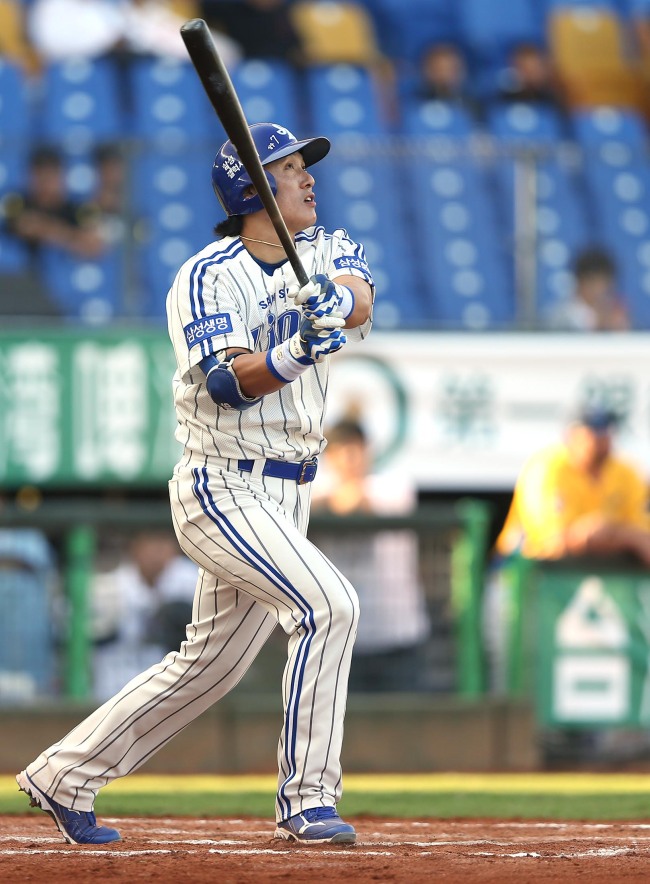 Samsung Lion`s Lee Seung-yeop hits a tie-breaking three-run home run in the bottom of the eighth inning to lead his team to a 5-2 victory over Fortitudo Bologn in the opening match of the Asia Series in Taiwan. (Yonhap News)

At Intercontinental Baseball Stadium, Lee Seung-yeop belted a tie-breaking three-run homer in the bottom of the eighth, powering the three-time reigning Korea Baseball Organization (KBO) champs past the Italian club.

The Lions will next face the Uni-President 7-Eleven Lions, the reigning Taiwanese champions, on Sunday at Taoyuan International Baseball Stadium.

The two Lions and Fortitudo Bologna are paired in Group A. The EDA Rhinos, the runner-up in Taiwan, the Australian champion Canberra Cavalry and the Japanese champion Rakuten Golden Eagles are in Group B.

The top two clubs from each group after round-robin play will reach the semifinals, which will be played on Monday and Tuesday. The final is scheduled for Wednesday.

The score was tied at 2-2 when Lee stepped up to the plate against Fortitudo's left-hander Junior Oberto. With runners on first and second, Lee quickly fell behind the count 0-2. He patiently worked the count to full, before taking a hanging curveball over the right-field wall for the decisive blow.

The Lions won the 2011 Asia Series, becoming the first non-Japanese club to win the event. A Japanese team has won five of the six Asia Series so far.

Fortitudo scored the first run in the second inning off Samsung's starter Baek Jeong-hyun, thanks to Luca Bischeri's RBI single.

The Lions tied the score on a sacrifice fly by Lee Ji-young in the bottom of the second, and Park Han-yi drove in the go-ahead run with a single in the fifth.

Andrea D'Amico evened the score for Fortitudo with a single in the seventh. When the game seemed destined for extra innings, Lee Seung-yeop came through with the eighth-inning blast.

Sim Chang-min took the win in relief, and Ahn Ji-man picked up the save with a scoreless ninth. Oberto, who served up the home run to Lee, was the losing pitcher.

Lee, 37, has made a career out of late-inning heroics and making an impact in big games. Lee famously hit the game-winning double off the future Major League Baseball (MLB) star Daisuke Matsuzaka in the eighth inning of the bronze medal game at the 2000 Sydney Olympics.