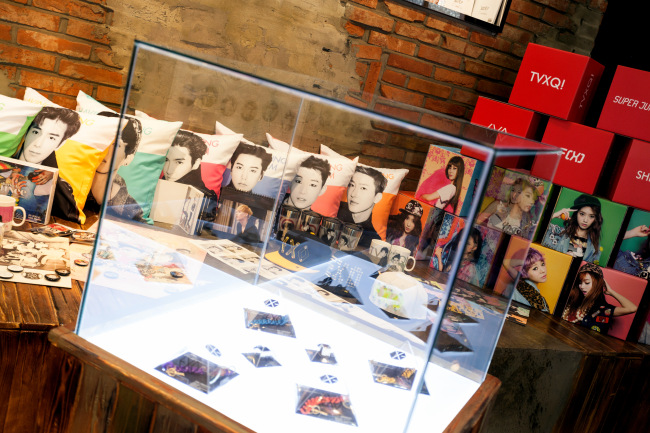 K-pop star-related merchandise is on display at the Hallyu Experience Zone. (Gangnam Tourist Information Center)
Gangnam Tourist Information Center is not your average information center with a bored employee behind a desk with free pamphlets. The multi-dimensional center, created by the Gangnam-gu local government, is not only staffed by highly-qualified employees, but also facilities such as a medical tourism and hallyu experience zone.

Since its opening in June, an average of 200 people have visited the center each day. Due to its convenient location in the vicinity of Apgujeong subway station near Hyundai Department Store, it is easy for anyone to access the available facilities.

“We were thinking of a location that was accessible, and at the same time showcased the trendy and fashionable side of Seoul that was emphasized through Psy’s ‘Gangnam Style.’ A location near Gangnam subway station would be the obvious choice, but actually, Sinsa-dong’s Garosu-gil is one of the top must-see places among tourists in Seoul. The Sinsa-dong area is often known as being a very trendy and fashionable place,” general manager of Gangnam Tourist Information Center Suna Lee said.

The first floor of the center includes an information desk staffed by employees capable of speaking English, Japanese and Chinese. Tourists who want to book a one-day city tour or even an excursion to the DMZ can receive help from the desk. Visitors can enjoy free internet and refreshments at the caf located inside the center.

The medical tourism zone includes four desks with specialists in the areas of plastic surgery, dermatology, Oriental medicine and medical exams. Visitors can enjoy free consultations for a variety of treatments, including minor botox injections and herbal treatments for ailments. 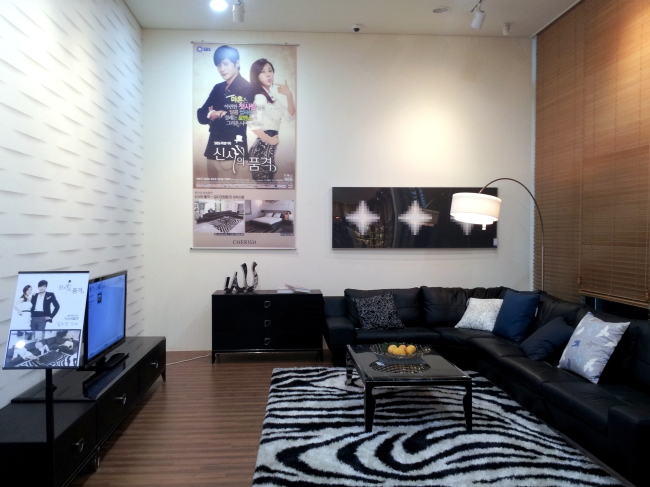 A lounge area in the Hallyu Experience Zone is modeled after the living room featured in television series “A Gentleman’s Dignity.” (Gangnam Tourist Information Center)
Located on the second floor and filled with photographs and exclusive items from popular hallyu stars, the Hallyu Experience Zone is filled with high-tech displays and fun activities.

In partnership with the Mnet program “M Countdown,” the Hallyu Experience Zone features a screen playing performances of the hottest K-pop stars.

The Touch Star Zone has tablet PCs to access unreleased performances and videos of K-pop stars using Near Field Communication technology. Bring one of the center’s NFC-equipped tablet PCs near a K-pop idol star displayed on the wall and a video clip will appear on the screen.

“Using the tablets was a cool experience. I always thought of Korea as a very tech-savvy place, so it’s no wonder they have these kinds of displays,” said Patricia Lin, a foreign exchange student from Hong Kong.

Visiting Korea with a tour group, American native Sarah Blanks said, “What girl doesn’t like to dress up? I had so much fun trying different outfits and using the make-up products.”

Even for those who are not K-pop fans, the flashy backgrounds and free make-up make for a good photo opportunity.

“Many visitors who come to our center aren’t necessarily K-pop fans. Many only know about Psy’s ‘Gangnam Style,’ but a lot of them have fun in the Hallyu Star Zone nonetheless,” Lee said, adding, “Many visitors especially from Europe or the United States come as a group, dress in Psy’s costume from the ‘Gangnam Style’ music video and take pictures and videos doing the horse dance.”

There is also a small souvenir shop and a rest area that is an exact replica of actor Jang Dong-gun’s living room in SBS television series “A Gentleman’s Dignity.” The rest area is changed every few months to feature different settings.

Gangnam Tourist Information Center is open every day from 10 a.m. to 8 p.m.