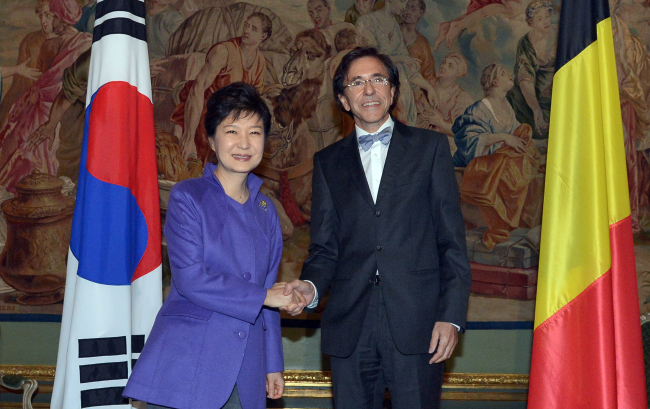 Park and Di Rupo discussed ways to fortify cooperation on the international stage, and shared views on the situation on the Korean peninsula and Europe. The two leaders also exchanged views on how to share Belgium’s experience in establishing a regional community, Cheong Wa Dae said.

Upon the summit talks, the two countries signed a memorandum of understanding in development fields to explore projects in such countries as Democratic Republic of the Congo, Rwanda and Vietnam.

They also agreed to maximize the use of the Korea-EU Free Trade Agreement to consistently expand bilateral trade and investment volume that currently stands at an annual $3.65 billion.

Wider economic cooperation will be sought in the fields of chemicals, pharmaceuticals, logistics and ICT. A joint committee will be established for science technology.

Cheong Wa Dae explained that on the occasion of Park’s visit, new investment pledges made by some five world-renowned EU companies reached an accumulated $370 million in value.

On security, the two leaders agreed that North Korea’s nuclear weapons threatened global peace and stability. Park underscored her position that the North’s nuclear problem should be discussed within the six-party talks for substantial results.

Park also expressed gratitude for Belgium’s participation in the Korean War (1950-1953) and said Belgium’s wisdom in leading the integration of Europe was an inspiration.

This was Park’s second visit to the country following trips in 2006 and 2009.

For the visit, Park also planned a meeting with scientists and venture businesspeople before the summit talks and dinner hosted by Belgium’s King Philippe.

Belgium is the last stop of her weeklong European tour. On Friday, Park is set to hold summit talks with the EU leadership, through which they will adopt a joint statement and set goals to broaden their bilateral relations on regional and international issues.