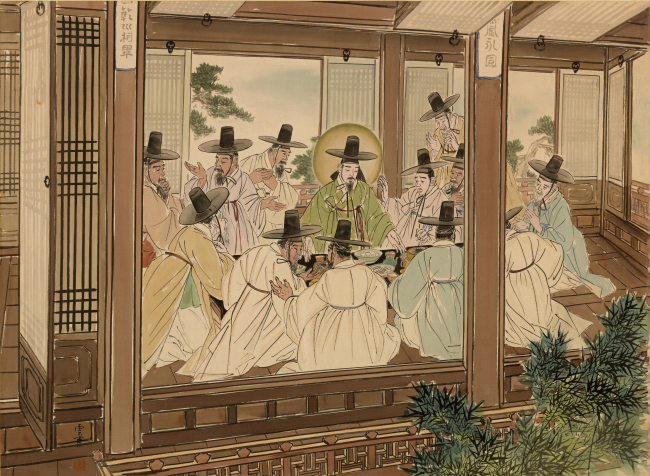 “The Last Supper” by Woonbo Kim Ki-chang (Seoul Museum)
One of the most famous biblical scenes ― baby Jesus in the arms of Mary surrounded by wise men from the East ― doesn’t feature the usual Western biblical representation in the late artist Woonbo Kim Ki-chang’s Jesus paintings.

At a thatched-roof house, home for commoners in the Joseon period (1392-1910), Jesus appears as a happy child in the arms of Mary, wearing a rainbow-striped jeogori ― the traditional Korean jacket for children. The Eastern wise men worshipping the newborn are dressed in official robes of Joseon ministers.

Such paintings interpreting Jesus in Korean culture are on view at Seoul Museum’s “Jesus and Deaf Lamb” exhibition that marks the centennial birthday of the artist Kim Ki-chang (1914-2001), who left unique footprints in Korean modern art by incorporating traditional Korean art with modern art. In the paintings, Kim portrayed himself as a deaf lamb due to his hearing impairment caused by the typhoid fever he had at age 8.

“Each painting is a result of thorough research into the life of Jesus and Western culture. The artist added the Korean traditional customs to it,” said Yi Joo-heon, director of the museum.

Kim, from a devout Christian family, originally started the project in the 1950s during the Korean War while he was taking refuge in his mother-in-law’s house.

“He thought the Korean people’s wartime tragedy was comparable to the sufferings of Jesus Christ,” Yi explained.

And the encouragement from his American missionary friend Anders Kristian Jensen helped him focus on painting during the war. It took him a year and a half to complete the first work depicting the life of Jesus from birth and life to death and resurrection taking place in Korea.

In the artist’s autobiography, Kim recalled Jensen saying, “A lot of Christian art is being produced in different cultures to promote the universality of Jesus Christ. I hope you gain the strength to complete the Korean Christian art.”

The paintings have many interesting Korean features worth examining in detail.

“Jesus in the form of a scholar in the Joseon period represents the image of a leader, despite him being born as a son of a carpenter,” Yi explained. Mary is wearing a head-skirt that Joseon women wore to cover their face instead of a veil. The Roman soldiers coming to arrest Jesus are Joseon policemen in traditional costume. 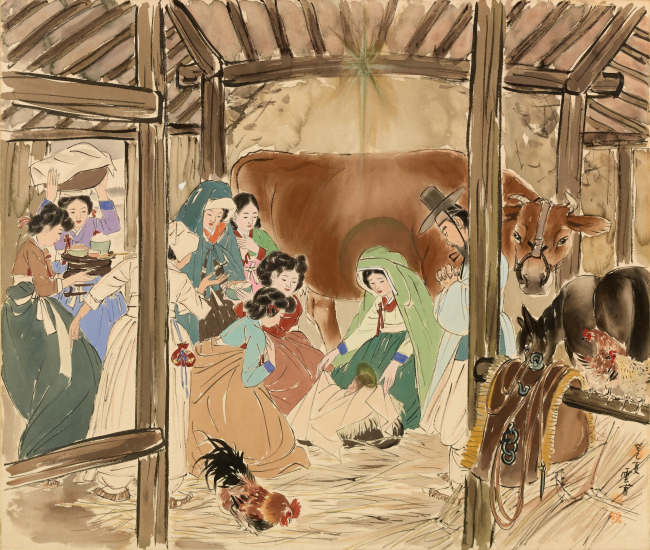 “The Birth of Jesus” (Seoul Museum)
Other features like a spinning wheel, a Korean symbol for chastity, are positioned beside the Virgin Mary in a scene where an angel in the form of a Taoist fairy foretells the birth of Jesus.

In Western paintings, lilies and clear glass bottles are used as references for the Virgin Mary.

More of Kim’s paintings that portray the Korean landscapes, lives of Korean people and scenes taken from folklore are on display at the exhibition.