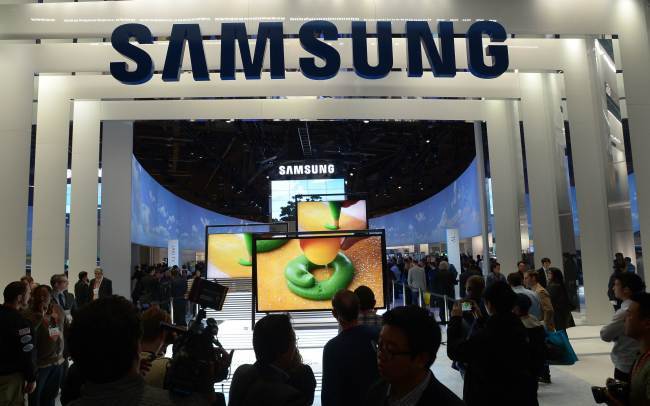 Consumers check products at Samsung booth at the 2013 International CES in this file. The Obama administration upheld a decision to ban some Samsung mobile technology products due to the company`s violation of patents owned by rival Apple. (AFP/Yonhap)
The Korean government expressed disappointment Wednesday with U.S. President Barack Obama’s decision not to veto an import ban on some mobile products of Samsung Electronics.

“It is regrettable that the U.S. government made different decisions related to patent infringement in a situation where Samsung and Apple are globally competing in the mobile telecommunications sector,” the Trade, Industry and Energy Ministry said in a press release.

The ministry was referring to Obama’s August decision to reverse a ban proposed by the U.S. International Trade Commission on some old models of the Apple iPhone and iPad found to have infringed Samsung patents.

Acting on behalf of President Obama, U.S. Trade Representative Michael Froman announced Tuesday the decision to prohibit Samsung from exporting a set of older models including the Galaxy S, Galaxy SII, Galaxy Nexus, and Galaxy Tab 10.1 to the United States.

But analysts said that the impact of the ban of some Samsung digital devices on the Korean tech giant’s sales in the U.S. market would likely be limited as most of them are old models.

Samsung Electronics made a similar response to the decision, hinting that it would file an appeal against the ruling at the U.S. circuit court of appeals.

“It is regretful that the import ban was imposed on some Samsung products from being imported into the U.S., which could put a limit on choice for American consumers and restrict competition,” Samsung said in a statement.

Some market observers expressed concerns over the U.S. government’s “biased” decision, although it was made on the basis of patents. The U.S. government said August’s decision was related to standard essential patents while the patents covered by Tuesday’s decision were not. Standard essential patents relate to products that must conform to a particular technical standard.

“The decision by the U.S. administration could trigger a rise of trade protectionism and further trade conflicts among nations,” said a Seoul market expert who declined to be named.

Other analysts said Obama’s decision was expected to stir up controversy over fairness in U.S. trade policy.

In August, the U.S. International Trade Commission imposed a ban on imports of those products, saying they infringed on Apple’s patents.

“After carefully weighing policy considerations, including the impact on consumers and competition, advice from agencies and information from interested parties, I have decided to allow the Commission’s determination,” Froman said in a statement.

Froman emphasized that his organization ignored the countries of origin in taking the step.

“The nationality of the companies involved played no role in the review process,” he said. “Both Samsung and Apple are important contributors to the U.S. economy and help advance innovation and technological progress.”

Samsung has accused the Obama administration of adopting a “protectionist” policy.

In its previous move favoring Apple in August, the Obama government overturned an ITC ruling against the Silicon Valley firm that would have banned the sale of certain iPads and iPhones in the U.S. market. It was the first time since 1987 a U.S. president had vetoed an import ban ordered by the ITC.