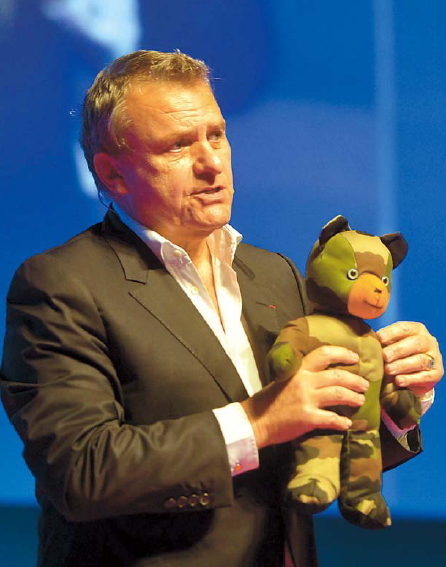 “Always, my life, I’ve done by encounters. Different encounters with very talented artists. Because I think it’s a way of learning about the talents of those people, about their creativity, and about the new times,” he said.

“Hijacking” was also key to creativity, the designer said during his session titled “Fashion Design, There Are No Limits.”

“Design is very important because design can change everything,” he said, pointing to various items around the room. “Everything can be made better with design.”

“If you are an artist or a designer, you want to change everything but that change can’t be for selfish reasons (as) design is also participation.”

Utilizing anecdotes, teddy bears, a drawing board, and a video of his latest fashion show, de Castelbajac told the aspiring designers at the forum that production can no longer be separated from creativity.

Unlike his early years when competition centered on technology, creativity outweighed all else with the coming of the 21st century and the Internet, he said.

The designer stressed that industrial elements are also critical for arts and design to take form, which he sees as giving Korea an edge in the field of design.

“Korea is a paradise for designers, because it’s a young country with young industries,” de Castelbajac told The Korea Herald after his lecture.

He explained that as a country that has grown into one of the technological leaders of the world, Korea represents numerous opportunities for technology and art to come together.

De Castelbajac is a French designer who has led the world’s fashion industry for more than 40 years.

He is known as a pioneer in crossing fashion and art, democratizing art by transposing the genre in an ultra feminine wardrobe and adding a new meaning to each of his fashion designs.

With a design empire spanning fashion, furnishing and watch, de Castelbajac has enjoyed global success with his creations such as a coat of teddy bears worn by U.S. pop star Madonna.

By Choi He-suk and Jeong Hunny