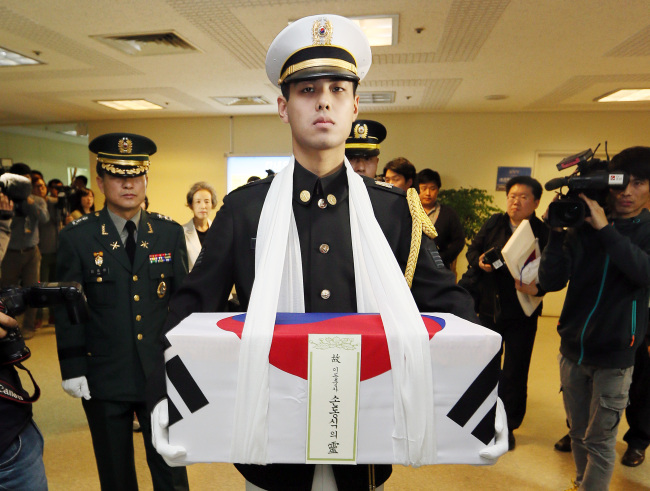 The ministry said the remains, believed to be those of Sohn Dong-shik, arrived earlier in the day and were sent to the Agency for Killed in Action Recovery and Identification for DNA analysis.

Sohn, a sergeant in South Korea‘s 9th Infantry Division, had been listed as missing during the Korean War (1950-53).

An alliance of civic activist groups, including Dream Makers for North Korea, has helped the transfer of the remains. Sohn’s daughter, who had defected to South Korea in 2005, had contacted the civic groups to bring the remains out of North Korea secretly.

The daughter whose name was not immediately available said she had been trying to retrieve her father‘s remains because his dying wish was to be buried in his hometown in South Korea’s southeastern province of North Gyeongsang.

The ministry, meanwhile, said that it will take about a month to test the DNA to positively identify the remains as belonging to the POW who had been held in the North since the end of the three-year conflict.

It said that once testing is completed and identity is confirmed, the remains will be interred at one of the country‘s national cemeteries, with the deceased given military tribute.

This repatriation of remains is the second of its kind with another soldier being brought back home in 2004. Besides the aforementioned two, there have been a number of cases involving the cremated remains of South Korean POWs being brought back from the North. (Yonhap News)