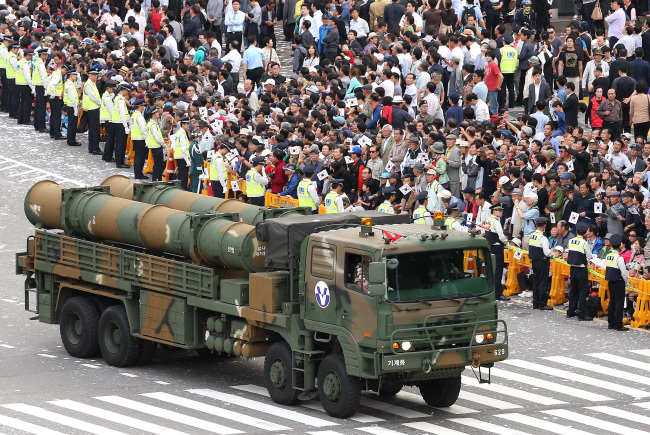 The Hyunmoo 3 missile is unveiled for the first time during the Armed Forces Day parade in Gwanghwamun, Seoul, Tuesday. (Yonhap News)
South Korea staged a massive military parade with the latest indigenous missiles and weapons on Tuesday to celebrate the 65th Armed Forces Day.

The Defense Ministry mobilized 11,000 soldiers at Seoul Air Base in Seongnam, south of Seoul, as well as 190 kinds of ground equipment and 120 aircraft to commemorate the establishment of the nation’s armed forces in 1948.

“This year’s Armed Forces Day celebration involves the largest number of forces and equipment since 2003,” the ministry said.

Among the equipment were indigenously developed cruise missiles capable of striking key locales in North Korea.

The South Korean Navy presented a series of homemade torpedoes, which can be launched from warships and submarines, as well as anti-ship missiles and ship-to-air missiles.