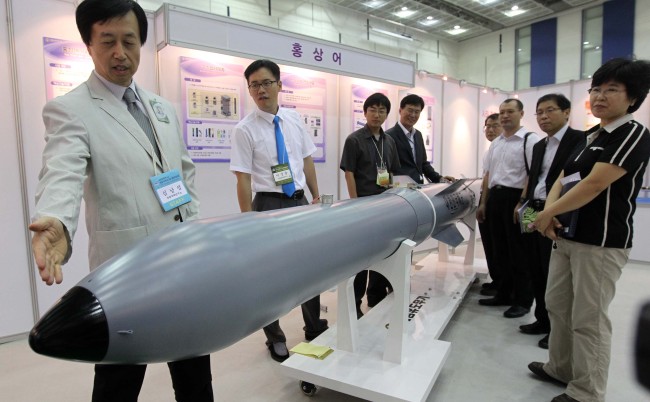 Researchers at the state-run Agency for Defense Development explain Hongsangeo, an anti-submarine torpedo, during an academic forum held at Daejeon Convention Center in August 2010. (Yonhap News)
Defense acquisition authorities are facing a tough choice over whether to resume the production of Hongsangeo, a domestic anti-submarine torpedo, as the final testing of the weapon was not satisfactory.

Since July, two practice Hongsangeo torpedoes and two live ones have been tested. Three of them hit the intended targets, while one live torpedo failed, a Defense Acquisition Program Administration official said, declining to be named.

The testing came after one Hongsangeo failed to hit its target and went missing during testing in July last year.

Following the failure, five practice Hongsangeo torpedoes and three live ones were tested between last September and February. Only five of them hit their targets. Thus, it failed to meet the accuracy rate of 75 percent required for combat deployment.

The DAPA and related defense agencies plan to determine whether to resume mass production this month following their consultations. The Agency for Defense Development has been developing the 5.7-meter torpedo with a budget of 100 billion won ($92 million) since 2000. One torpedo costs around 1.8 billion won.