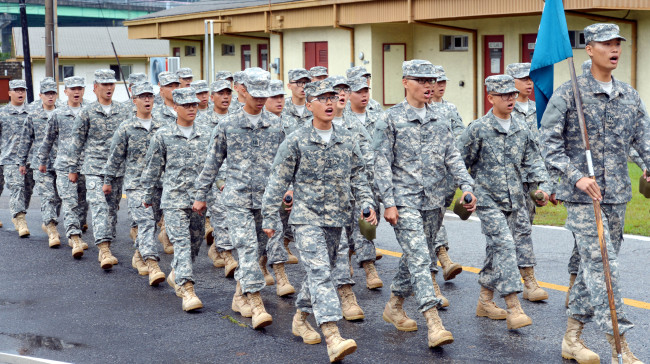 A group of new recruits march during a drill-and-ceremony training session at the KATUSA Training Academy in Camp Jackson in Uijeongbu, north of Seoul, last month.
This is the fourth in a series of articles to mark the 60th anniversary of the South Korea-U.S. alliance. ― Ed.


Shared goals of defending against North Korea and safeguarding democracy and free markets have held together the South Korea-U.S. alliance for the past 60 years.

At the core of their chemistry is a little-known corps of young soldiers called the KATUSA, or Korean Augmentation Troops to the U.S. Army.

“Korea and the U.S. are intertwined as the two cogwheels of the alliance, and I am convinced that the KATUSAs have served as the vital lubricant oil for the wheels,” said Cpl. Noh Kou-hwan, who has worked in the U.S. army garrison in Yongsan, Seoul, for 16 months.

Noh is among the 3,444 elite Korean conscripts assigned to U.S. bases across the country for the KATUSA program, which has helped facilitate communication between the allied militaries and strengthen combat readiness for peninsular defense.

The obscure symbol of the sturdy alliance was born out of necessity during the 1950-53 Korean War.

The idea was developed into a verbal agreement between South Korea’s first President Syngman Rhee and U.S. Gen. Douglas MacArthur, who led the allied forces in the defense of the South. Seoul expected the deal to serve to improve its rudimentary military.

In the beginning of the program, KATUSAs with little education and training were viewed with skepticism. But with Korea’s successful recovery from the tragic hostilities, they have gained a reputation as an elite group working for a variety of U.S. positions including interpreters, combatants, drivers, police, engineers and medics.

In former U.S. Secretary of State Colin Powell’s autobiography, titled “My American Journey,” he portrayed the KATUSAs as some of the most outstanding troops he has met, citing their “unwavering military spirit and excellent learning capabilities.”

Powell served as a battalion commander in the 2nd U.S. Infantry Division in Korea in 1973.

For KATUSAs, working with the U.S. military is a valuable opportunity to experience how the world’s most advanced combat organization functions and to get the hang of how to work with people from different cultures.

The augmentation troops are selected at random after having applied for the competitive program with a required level of English proficiency. The annual competition ratio is nearly 8-to-1.

“We work in an environment where you constantly work to get your point across to people from different cultures by organizing your thoughts in a logical way, not with your mother tongue, but in English,” said Sgt. Shin Young-sun from the public affairs office at the Yongsan garrison. 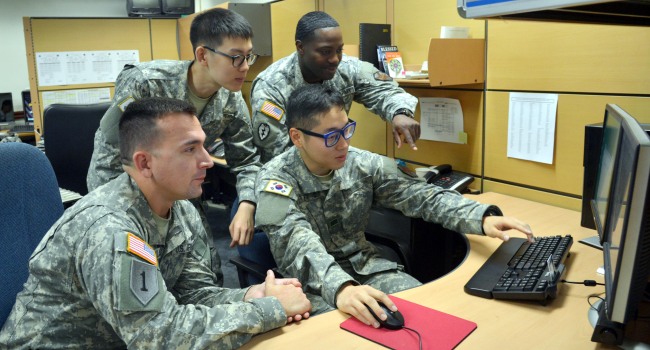 KATUSAs work with U.S. soldiers at a public affairs office in the U.S. garrison in Yongsan, central Seoul, last month. (Kim Myung-sub/The Korea Herald)
“Through this sort of learning experience, you hone hands-on skills to associate with people of various types ― skills to make them understand what you are getting at and get their cooperation.”

But straddling the two militaries is not easy, added Lee, who has served in Yongsan for nearly 18 months. The Korean Army is in charge of administrative issues such as disciplinary action and personnel management while the soldiers are under the U.S. operational command.

“Even though we have U.S. supervisors, they can’t take disciplinary action against us. Because of this, there were conflicts sometimes, but most cases were settled in a positive way through close bilateral consultation,” he said.

“Different military cultures such as hierarchical relations among enlisted Korean soldiers can also become a source of misunderstanding. But we try to explain that to our U.S. colleagues and they mostly grasp the differences.”

Apart from the dual oversight structure, cultural and language barriers, and large income gaps have been sources of tension between the Korean soldiers and their U.S. colleagues. Korean conscripts receive around 100,000 won ($92) per month.

Besides their official duties as part of the U.S. military, KATUSAs also play an important role to help new U.S. staff quickly adapt to their life in Korea.

“After work, we try to bring U.S. fellows out to the city to get a taste of Korean food and culture so that they can improve their understanding of the country ― far away from their homeland,” said Cpl. Lim Hong-seo, another PR staff in the Seoul garrison.

“It is very rewarding as I feel that I can make a small yet important contribution to the alliance in some way.”

“They help prevent those barriers we face and make things a lot easier. They teach me how to use the subway and buses. When you just get here … at the beginning, it is very hard to move around,” he said.

These full-fledged KATUSAs get their basic training at the KATUSA Training Academy in Camp Jackson in Uijeongbu, north of Seoul.

“We train the best, we are the best, KTA!” a platoon of new recruits shouted during their drill-and-ceremony training session at the camp tucked at the foot of Mount Dobongsan.

Just five days into the basic U.S. military training, they looked awkward, but excited and eager to learn for their fresh life as KATUSAs. They all came to the KTA after five weeks of training at a Korean Army camp in Nonsan, South Chungcheong Province.

New recruits take a land navigation class at the KATUSA Training Academy in Camp Jackson in Uijeongbu, Gyeonggi Province, last month. (Kim Myung-sub/ The Korea Herald)
“They ask so many questions. But I like that because they want to know, do their best and want to get better. They are like a sponge,” said KTA instructor Staff Sgt. Jeremy Allen Smith.

Sgt. 1st Class Atanasio B. Viera, another KTA instructor, said his training emphasis has always been on bringing out the good qualities of Korean culture that are “already in their blood.”

“These are young men who want to be trained. They are open to anything you tell them. They come here with open minds and respect. You’ve got to be a leader who has empathy and sympathy and that is my training philosophy.”

No matter how difficult their training is, the students with great expectations about life as a KATUSA painted a bright future of their working with the U.S. Army.

“I believe as long as the antagonism between the two Koreas continues, the Korea-U.S. alliance should remain steadfastly robust. And KATUSAs can stand in between them for the alliance,” said Pvt. Kim Han-kil, a 21-year-old KTA student.

“Personally, I have high hopes that I can experience a new culture, new way of life with U.S. fellows, which will be helpful to broaden my horizons and help further my college studies in international trade.”

Established in 1975, the KTA trains some 2,000 students each year with eight Korean and U.S. instructors taking charge of four platoons. About 5 percent of each class consisting of up to 175 students become “holdovers,” but graduate from the school in the next class.