[ The Korea Herald – Send E-mail ]
[Newsmaker] N.K. leader’s aunt back from sick leave
By Korea Herald
Published : Jul 29, 2013 - 19:48
Updated : Jul 29, 2013 - 20:51
Kim Kyong-hui, the powerful aunt of North Korean leader Kim Jong-un, returned to the public eye last week for the first time since May amid persistent speculation that she was in critical condition.

On Thursday, the North’s official Korean Central Television showed Kim, 67, appearing at a ceremony marking the completion of a cemetery in Pyongyang where those killed during the Korean War were laid to rest. 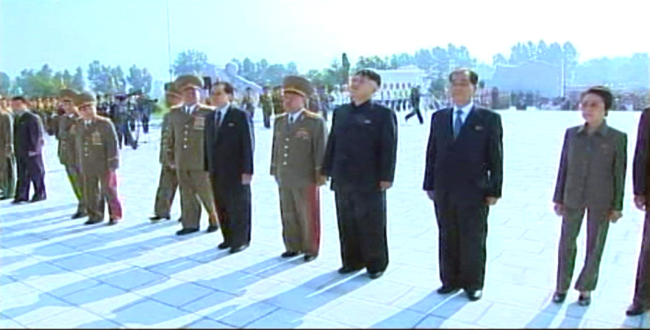 The North’s Korean Central Television shows Kim Kyong-hui (right), the aunt of North Korean leader Kim Jong-un (third from right), attending a ceremony marking the completion of a national cemetery in Pyongyang last Thursday. (Yonhap News)
The younger sister of late strongman Kim Jong-il seemed to be in a relatively stable condition during the event attended by top officials including her husband, Jang Song-thaek ― one of the few influential advisers to the fledgling ruler.

She had not been seen since May 12 when she attended a concert with the North Korean leader and Jang. Rumors then spread that Kim was in serious condition and had been treated by foreign medical staff.

Her apparently waning health has raised the prospect of some change in the top power structure. Observers said that in particular, Jang’s political legitimacy could weaken should his wife die, ending his ties to the Kim dynasty.

Jang currently serves as vice chairman of the National Defense Commission and administration director of the ruling Workers’ Party’s Central Committee ― a position with substantial influence over state intelligence and police agencies.

“Kim Kyong-hui, with her royal pedigree, is the only surviving figure who represented the Kim Jong-il era, and for Kim Jong-un, she has been someone he mentally could lean on,” said Ahn Chan-il, the director of the World North Korea Research Center.

“Should she die, Jang’s power could shrink.” But Park Hyeong-jung, a senior research fellow at the Korea Institute for National Unification said Jang might inherit some of the power from his wife, should she die, to prevent any instability within the leadership structure.

“Pyongyang might be preparing for the worst case. It might have already crafted measures to prevent any negative shift that could come with the possible death of Kim Kyong-hui,” he said.

The aunt of the third-generation leader is thought to have suffered from alcoholism and depression due to marital discord with Jang and the sudden death of her daughter Geum-song.

Her only daughter is thought to have taken her own life in 2006 while studying in France, reportedly due to her parents’ opposition to her marriage plans. It is rumored that Kim and Jang have long been estranged from each other.

In September 2010, Kim Kyong-hui was made a four-star general and took core party leadership posts, becoming a member of the party’s powerful politburo.