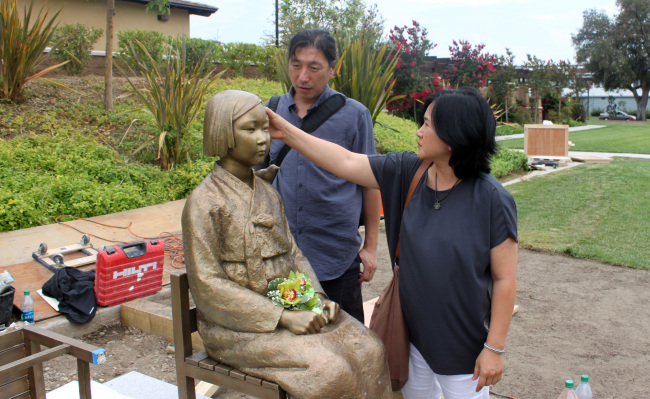 Sculptors Kim Un-seong (left) and Kim Seo-kyeong make last-minute touches to the “Statue of a Girl of Peace” in Glendale, California, Sunday. (Yonhap News)
The erecting of the installation was led by the Korean American Forum of California.

The forum, comprised of Korean-Americans in California, was formed to support the 2007 House resolution against Japan’s sex slavery submitted by U.S. representative Mike Honda. Upon the passage of the resolution, the forum had been campaigning for a memorial statue in the region.

There are 32 other monuments to the Korean comfort women displayed in public places in New York and New Jersey.

Glendale has been active in acknowledging the movement, and designated July 30 as Korean Comfort Women Day. Glendale Mayor Frank Quintero, a Vietnam War veteran, had promised during his visit to Seoul in April that he would work to raise awareness of the plight of the comfort women.

Japan’s government has been inviting escalating international scrutiny over its attempt to whitewash history, with a number of its leading politicians outwardly denying the country’s responsibility for its wartime sex slavery, such as by saying it was a necessary evil.

Nationalism is expected to continue to prevail in Japan with Prime Minister Shinzo Abe and his ruling bloc recently regaining control of both houses of parliament for the first time in six years.

The installation of the statue has also reportedly been strongly protested by Japanese-Americans and the Japanese consul in Los Angeles.