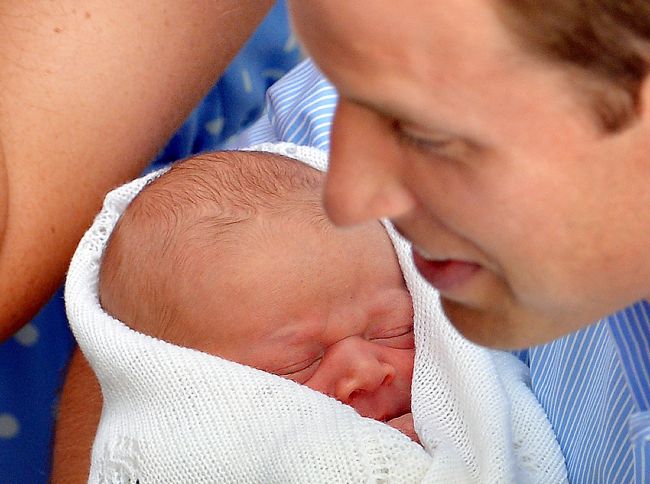 Prince William, the Duke of Cambridge, holds his newborn baby boy in front of the world’s media outside the Lindo Wing of St. Mary’s Hospital in London on Tuesday. (AFP-Yonhap News)
For British newspapers, a good story about the royal family sells, and they made the most of Monday’s birth of Prince William and Princess Kate’s new son.

The Sun changed its “u” to an “o” to mark the birth, while three others splashed “It’s a Boy!” across their front pages.

Fountains in London were lit up in blue, along with Niagara Falls and other landmarks in Canada and New Zealand.

Away from the media scrum at the hospital, crowds flocked outside Buckingham Palace to catch a glimpse of an official declaration, displayed on an easel, of the birth of the new prince, who is third in line to be head of state of 16 countries.

Given the modern length of royal life spans, it may be 60 years before he takes the throne, by which time Britain may no longer have such an anachronistic institution in place.

The monarchy’s continued favor is due to individual popularity and a pragmatic lack of alternatives, so it may yet endure.

The British royal family’s main constitutional role is to ensure no one else is head of state. Along with day-to-day activities as diplomat, tourist attraction and celebrity wearer of clothes, Queen Elizabeth II is seen as doing this quite well.

Faced with the prospect of a president Blair or Johnson, most Britons seem happy to stick with the nice old lady they currently have as head of state.

The damage Prince Charles’ unpopularity ― and secret lobbying ― have done to this appears to have been undone by William’s general appeal.

This perhaps explains the press and public enthusiasm. The birth is a historic event, and it is hard to be disdainful of a woman and her newborn baby.

But it also confirms again the royals’ status as celebrities, rather than political figures. Attention has turned to more mundane aspects of life with a newborn that could not possibly be of interest otherwise.

Prince William has changed a diaper. “Done that,” he told reporters, as if ticking it off a checklist. He may even do it again, given that he reportedly differs from his father by dressing himself every day.

Media described the newborn as appearing in a white shawl, the first of an inevitable stream of observations on his fashion choices. As if to ram the point home, some newspapers posited that his mother’s polka-dotted dress was a nod to Princess Diana’s postnatal attire.

Many are now betting on what the name of the royal sprog will be. Gambling sites put the odds in favor of George, but the more adventurous are offered 500-1 for Joffrey, or Psy at 5,000-1.