The sympathy rally was launched in support of Kim Jin-suk, a female labor union member, who protested alone on a 35-meter-high crane for more than 300 days against Hanjin Heavy Industries and Construction after the shipbuilder laid off more than 400 workers. 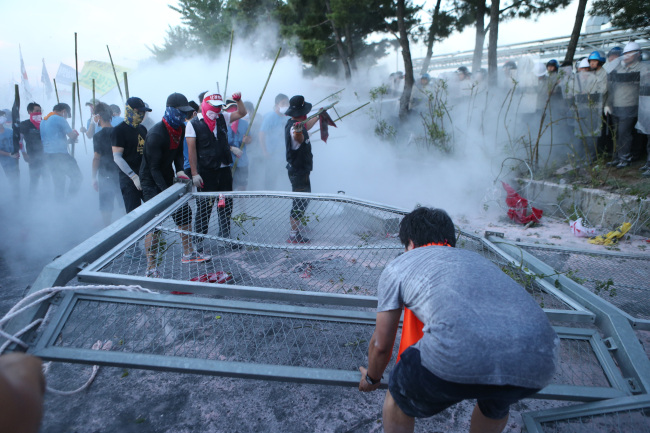 Hope Bus participants armed with iron pipes tear down a wire fence at a Hyundai Motor factory site in Ulsan on Saturday. (Yonhap News)
Ferried in by buses, about 8,000 participants from across the country visited the shipyard in Busan on five occasions. Supporters of Kim and the sacked Hanjin workers included civic groups, opposition politicians, religious figures and even some celebrities, including actress Kim Yoh-jin.

Instead of confronting the armed police forces with weapons, they held performances and open-discussions to speak out against the unjust dismissal of workers.

As the rally gained public support, the National Assembly, urged by lawmakers from the opposition parties, proposed a mediation to Hanjin chairman Cho Nam-ho. Cho accepted the proposal and so did Kim from the crane.

The icon of the peaceful demonstration, however, has since been losing its identity. Residents of areas where protests were held accused rally members of holding drinking parties on the streets and throwing trash everywhere. Some observers charged that the voluntary movement had become politicized by the Federation of Korean Trade Unions, a progressive umbrella union group.

In a rally calling on Hyundai Motors to upgrade the work status of their irregular workers, some of the group clashed with the police. The bus riders armed with iron pipes are said to have attempted to take over a factory unit of Hyundai in Ulsan. More than 100 protestors and police were severely injured in the process.

Businesses and conservative politicians immediately issued statements urging the government to take stern action against the violent members. Media and civic groups also attacked the protestors for no longer seeking peace through dialogue.

Meanwhile, Hope Bus organizers said on Monday they would never stop protesting against ruthless companies and authorities. But the question remains whether they can win the public’s support, as they did two years ago, if they continue on the road of violence.