Suh Young-kyung, who has worked for the BOK for 25 years, embarked on her three-year term as one of the seven executives at the central bank on Tuesday.

There are five deputy governors at the bank, who share the No. 3 rank following Governor Kim Choong-soo and Senior Deputy Governor Park Won-shik. Each may be reappointed for a second three-year term. 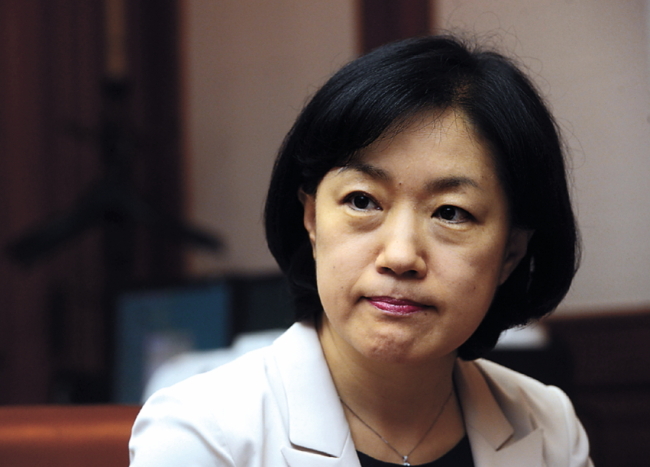 Suh Young-kyung (Yonhap News)
Born in Seoul in 1963, Suh joined the BOK in 1988 after graduating from Seoul National University. She earned a doctorate in economics from George Washington University in 2003.

As well as Suh being the first female executive in the bank’s history, her nomination is regarded as unprecedented as she skipped the director general post.

Suh was serving as a department head ― a position lower than director general ― at the bank’s monetary policy bureau.

Under Gov. Kim’s tenure, which started in April 2010, Suh was a pioneer in fast-track promotion at the bank. She become the first female team head in 2010 and first department head in 2012.

Under the Bank of Korea Act, the governor, appointed by the president on the deliberation of the Cabinet, represents the central bank.

The BOK governor serves a four-year term and can be reappointed for a single consecutive term.

The governor carries out the policies formulated by the Monetary Policy Committee, the benchmark rate-setting entity, as the chief executive officer of the bank.

He or she also keeps the committee informed of current matters requiring its attention and provides it with material and advice as necessary.

In addition, the governor may state his or her opinion on matters related to money and credit directly to the Cabinet.

The No. 2 figure of senior deputy governor assists the governor and is appointed by the president upon recommendation of the governor.

The three deputy governors are designated by the governor and undertake their respective duties in the manner stipulated in the articles of incorporation of the BOK.