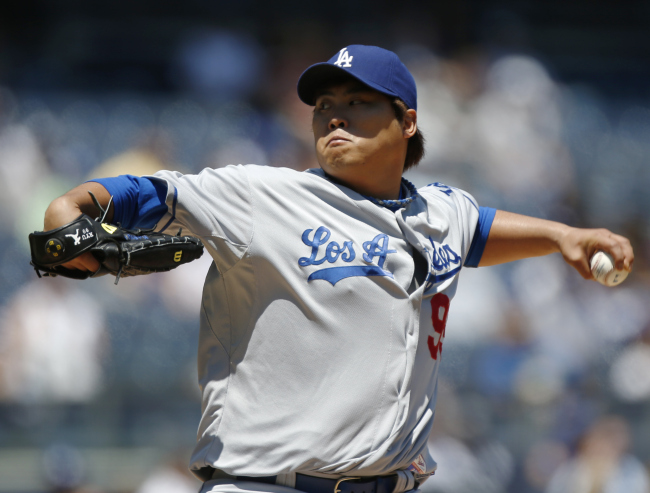 Hiroki Kuroda shut down his former team into the seventh inning, Ichiro Suzuki homered and drove in three runs, and the New York Yankees spoiled Don Mattingly's return to the Bronx with a 6-4 victory over the sloppy Los Angeles Dodgers on Wednesday in the opener of a day-night doubleheader.

Lyle Overbay hit a two-run double against South Korean rookie Hyun-Jin Ryu (6-3) in the first game in New York between the old October rivals since Los Angeles clinched the 1981 World Series title with a victory in Game 6 at the original Yankee Stadium. The teams that have met in a record 11 World Series - eight won by the Yankees - never faced off in interleague play at the Stadium before this week.

Baseball's two injury battered $200 million teams have to pack a two-game series into one day because rain postponed Tuesday night's opener. Los Angeles' Chris Capuano was scheduled to come off the disabled list so he can start the nightcap against New York's Phil Hughes.

Exciting Cuban rookie Yasiel Puig led off the eighth by daringly stretching a liner to left-center into a double - he got thrown out trying a similar play in the first. Suzuki then made a leaping catch at the wall in right field for the first out before Hanley Ramirez hit a two-run homer off Preston Claiborne to cut the lead to 6-4. The Yankees had scored three times in the seventh thanks in part to reliever Ronald Belisario's two errors on one play.

David Robertson relieved Claiborne and walked his first two batters before ending the inning without further damage. Mariano Rivera was perfect in the ninth for his 25th save, ending hopes for vocal Dodgers fans that Mattingly's return to the city where No. 23 starred from 1982-95 would be a success.

He may be wearing the wrong shade of blue now but Yankees fans still love Mattingly.

Scattered applause from the late-arriving crowd greeted Mattingly when he brought the lineup card to homeplate. He hugged Yankees bench coach Tony Pena - another coach who lost out to Joe Girardi for the New York managerial position after 2007 - then went over the ground rules for the ballpark he never played or coached in (the new Yankee Stadium opened in 2009).

There was the "Donnie Baseball!" chant from the bleacher creatures for the 1985 AL MVP ahead of the bottom of the first and a video tribute for a career enshrined with a plaque in Monument Park before the Yankees scored twice in the second. Both times Mattingly answered the applause with a wave of the cap from the visitors' dugout.

The Yankees quickly turned the attention back onto the field, scoring twice in the second against Ryu. After Thomas Neal and Suzuki led off with singles and advanced on David Adams' sacrifice, Overbay laced a line drive over center fielder Andre Ethier's head for the 2-0 lead.

Kuroda (7-5), who began his Major League career with the Dodgers in 2008 and won 41 games for them, limited Los Angeles to five hits and helped himself by catching a liner to start a double play with runners on second and third in the fourth before the seventh. He was lifted after giving up A.J. Ellis' sacrifice fly former Yankees utilityman Jerry Hairston Jr.'s two-out, RBI pinch-hit single in the seventh.

The Yankees added three more in the bottom half of the seventh, helped when, with runners on first and second, Belisario let Vernon Wells' meek pop in front of the mound drop for an error. Jayson Nix advanced to third on the drop and scored when Belisario threw the ball into center field trying to get Robinson Cano at second base. Belisario hit Thomas Neal with a pitch, then Suzuki greeted Paco Rodriguez with a blooped two-run single to make it 6-2.

Suzuki homered in the sixth off Ryu, who gave up three runs and five hits. (AP)