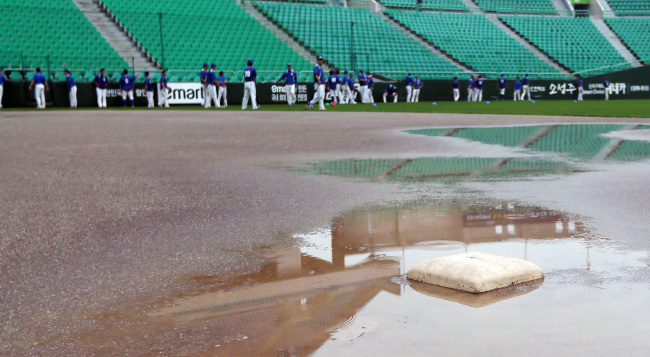 Heaps of baseball game cancellations are expected to shake up the standings of Korea’s top professional baseball league following the start of the monsoon season on Tuesday.

The Korea Meteorological Administration forecast heavy rain from Monday through Thursday, and predicted the rainy season would continue until mid-July. Most teams at the Korea Baseball Organization are likely to be forced into long breaks as many of their games are likely to be canceled over the next four weeks.

The unscheduled break could mean a vital chance to rebound for some teams, but could spell trouble for others.

Nexen Heroes, which got off to an uncharacteristically good start this season to stand in second place, recently saw seven straight defeats.

To make matters worse, Heroes’ veteran pitcher Kim Byung-hyun was recently fined for throwing a ball at an umpire, while a couple of its player makers were nabbed by police for drunk driving.

With the prolonged rest, Heroes can hope to recover team chemistry shattered by the series of unfortunate events.

The same goes for SK Knights and Hanwha Eagles, who both are performing well below expectations in seventh and ninth place, respectively. The teams can hope for a strategic overhaul during the long break.

The Eagles’ winning rate fell from 40.8 percent last season to 30.9 percent. As a result, Hanwha is stuck at the bottom of the standings, behind the expansion team NC Dinos.

The long rest could help the Eagles wait for their best pitcher Denny Bautista, who has temporarily joined the reserve team to recover from fatigue.

The teams who have been on a roll, on the other hand, are concerned their hot streaks may be cooled off by the break. Those teams include LG Twins and Kia Tigers, who have won five and seven games in a row, respectively.

Rustiness could be another negative factor in long breaks, as in the case of Doosan Bears. The team has already rested for four days and can potentially go a full week without playing, which could spell trouble when the Bears finally go back on the field.