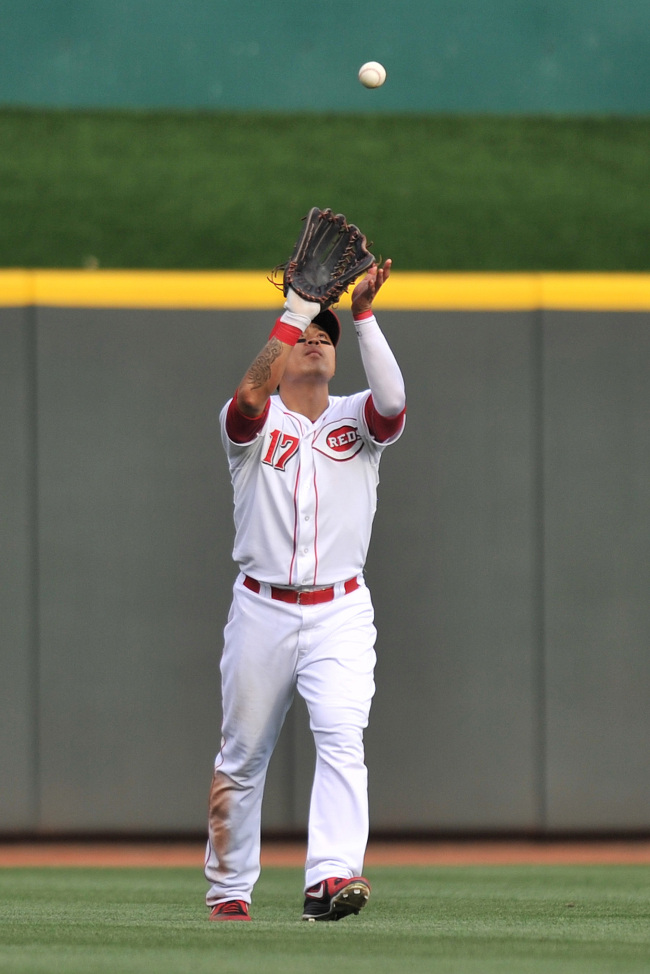 Reds center fielder Choo Shin-soo catches a fly ball in the ninth inning. The Korean went 1 for 4.(AFP-Yonhap News)
PITTSBURGH (AP) ― Juan Uribe singled home Andre Ethier in the top of the 11th inning to rally the Los Angeles Dodgers to a 5-3 victory over the Pittsburgh Pirates on Saturday.

Ethier doubled off Vin Mazzaro (3-1) leading off the 11th then raced home when Uribe’s chopper went over the head of third baseman Pedro Alvarez. Nick Punto drove in Uribe with a double to the gap one batter later to provide some insurance.

Peter Moylan (1-0) picked up the win after escaping a bases-loaded jam in the 10th. Brandon League, who lost his job as the closer to Kenley Jansen this week, managed the final three outs for his 14th save.

Travis Snider capped a late Pittsburgh rally with a solo home run off Jansen with one out in the ninth to tie the game.

Los Angeles starter Clayton Kershaw scattered three hits over seven innings while lowering his ERA to a National League-leading 1.84, but failed to pick up his first win in three weeks when the Dodgers’ bullpen faltered.

CINCINNATI (AP) ― For the first time, the Brewers learned what it’s like to keep an opponent from crossing home plate. Pretty nice feeling, actually.

Juan Francisco drove in three runs with a sacrifice fly and homer in a ballpark where he’s had some big moments, and Yovani Gallardo pitched six innings on Saturday, leading Milwaukee to a 6-0 victory over the Cincinnati Reds.

It was the Brewers’ first shutout ― they were the only team in the majors without one. Milwaukee’s staff came into the game with the NL’s worst earned run average, giving up more runs and homers than any other club.

“They’ve gotten us pretty good in this park this year,” manager Ron Roenicke said. “6-0 ― we don’t have too many of those. It’s nice to kind of be able to relax.”