There was no repeat of the brawl that occurred in the seventh inning of the Dodgers’ 5-3 victory a night earlier, when six players and coaches were ejected. No batters were hit by pitches this time.

Prado put the Diamondbacks ahead 5-4 with a ground-rule double to left field off Ronald Belisario (3-5), who was charged with four runs and three hits in two-thirds of an inning. He walked two and didn’t retire any of the four batters he faced in the 12th. 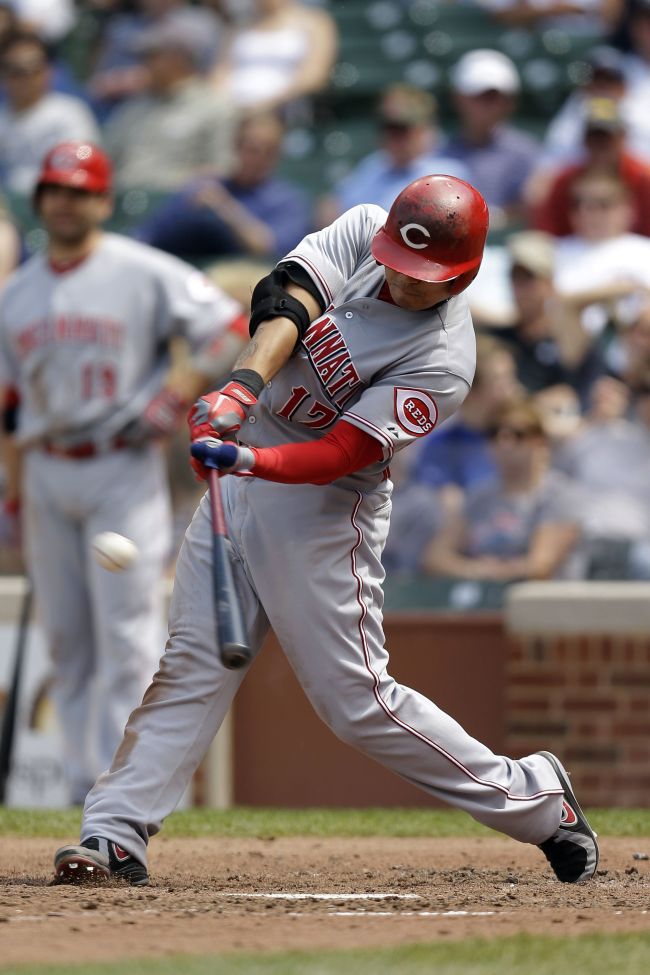 Reds center fielder Choo Shin-soo hits a double in the sixth inning. The Korean went 1 for 3 with a walk and a stolen base. (AFP-Yonhap News)
Arizona made it 6-4 on Cliff Pennington’s bases-loaded RBI single off Brandon League, the Dodgers’ seventh pitcher. League gave up four runs over two-thirds of an inning in Los Angeles’ 5-1 loss in the series opener Monday.

Diamondbacks starter Patrick Corbin owned a 3-0 lead when he gave up five consecutive hits with two outs in the fifth, allowing the Dodgers to take a 4-3 lead.

Hernandez had an RBI groundout that scored Juan Uribe, who led off with a double.

Dodgers starter Ryu Hyun-jin tripled to deep right field ― the first of his career ― and Parra misplayed the ball as it skipped past his outstretched glove. That drove in Alex Castellanos, who reached on a ground-rule double and went to third on Montero’s passed ball.

Leake combined with Aroldis Chapman on a three-hitter and Todd Frazier hit a tiebreaking home run against Wood in the seventh inning, leading the Reds past the Cubs 2-1 Wednesday for their record 12th straight win at Wrigley Field.

Leake (6-3) won for the fourth time in five decisions.