“I am bewildered and didn’t know if I would win a prize,” the 30-year-old director was quoted as saying after the awards ceremony in France. “I am all the more happy to receive this award because I had no expectation that I’d win.” 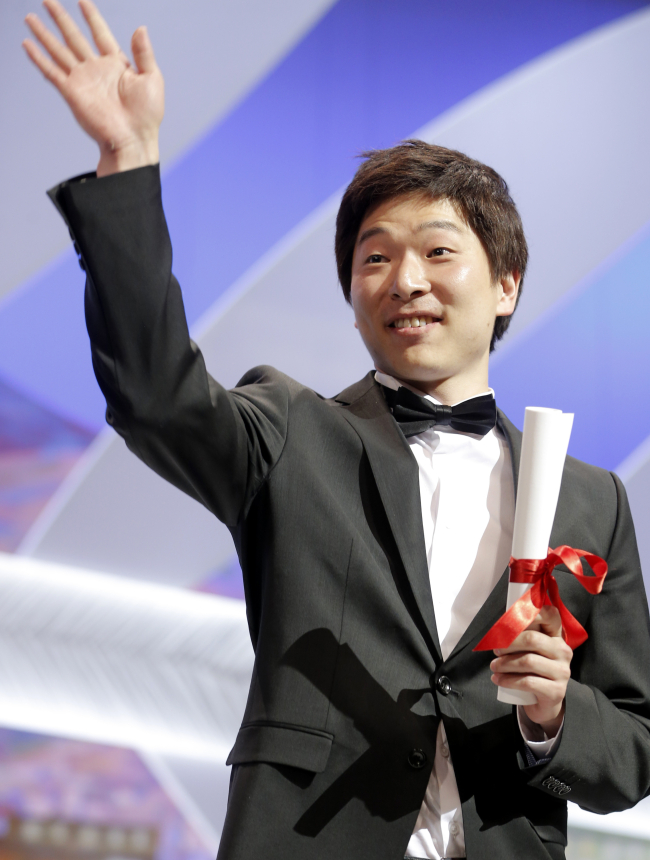 Moon Byoung-gon is presented the Best Short Film award for his film “Safe” during an awards ceremony at the 66th International Film Festival in Cannes, France, Sunday. (AP-Yonhap News)
The 13-minute short is described as a grim portrait of a man addicted to gambling and a female college student who works for an illicit exchange booth. Its plot develops as the young woman steals money from her workplace for personal use. Moon created the film with the support of Shin Young Kyun Arts and Culture Foundation, which annually selects one pitch for a short film and funds the project.

Moon studied film at Chung-Ang University in Seoul and has directed two shorts ― “No More Coffee Break” (2008) and “Finis Operis” (2011). The fantasy short “Finis Operis,” a portrait of an aging man living a secluded life, was featured at Cannes in its International Critics’ Section in 2011.

No Korean filmmaker has won the top prize for a short at Cannes prior to Moon’s win on Sunday. At Berlinale, however, Park Chan-wook and his media artist brother Park Chan-kyong won the top prize in 2011 for their iPhone-made short “Night Fishing.” Meanwhile, Korean up-and-coming director Yoo Min-young won the Best Short Film award for her film “Cho-de” at Venice International Film Festival last year.

Another Korean short, “The Line” by Kim Soo-jin, has been invited to the festival’s Conefondation, a competition section created in 1998 to inspire and support the next generation of international filmmakers. No Korean feature film was invited for the edition.