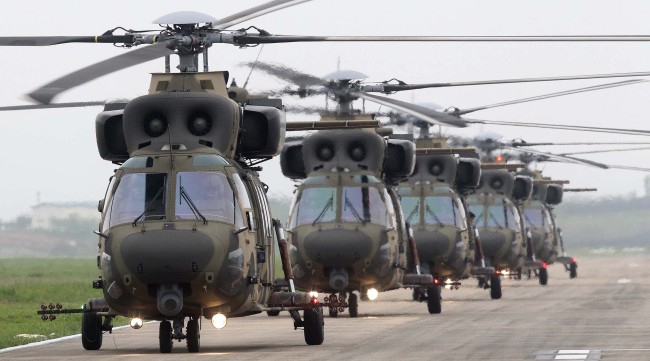 Surion helicopters are shown off at the Army Aviation School in Nonsan, South Chungcheong Province, Wednesday. (Yonhap News)
President Park Geun-hye reaffirmed Wednesday that South Korea would not provide any concessions or assistance in response to North Korean saber-rattling.

“During my visit to the U.S., President (Barack) Obama and I clearly stated that we will sternly counter any provocation by North Korea but have the doors to dialogue open at all times,” Park said, referring to the May 7 summit talks in Washington.

She made the remarks during a ceremony to deploy Korea Aerospace Industries’ Surion, South Korea’s first indigenously developed military helicopter.

“I once again strongly urge North Korea’s change” that will be responded to with the trust-building process aimed at co-existence and co-prosperity, she added.

Expressing regret over North Korea’s refusal to talk about the suspended joint-industrial complex and calling for an immediate halt of provocations including the latest launch of what were presumed to be guided missiles, Park called on the military to maintain a strong defense posture and achieve stronger security capacity.

Park congratulated the integration of the Surion helicopters developed primarily by KAI and promised full government support for defense technology development and export.

“What is more significant about this project is that this is the accomplishment of joint efforts by not only the government, the military and the defense industry, but also a private research organization,” she said.

Park promised extensive support to localize and modernize weapons systems and urged the industry to contribute to the country’s economic development as a central engine of the “creative economy.”

Dressed in a pilot’s jacket, Park briefly took a seat inside the helicopter for a photo-op after delivering the speech.

The military is confident that the indigenous helicopter will significantly increase aerial operational capabilities, along with 36 AH-64E Apache Guardians, which it will deploy between 2016 and 2018.

The Army has so far deployed 11 Surion helicopters and plans to deploy 20 units each year for a total of 200 by 2022. With the operational deployment of the Surion, South Korea became the 11th country to have developed an indigenous military chopper.

The Seoul government has invested 1.3 trillion won ($1.16 billion) in the “Korean Helicopter Program” since June 2006 to build a domestically-developed military helicopter to replace the aging UH-1H, 500MD and other helicopters introduced some four decades ago.

The high-tech helicopter was developed primarily by Korea Aerospace Industries, the Agency for Defense Development and Korea Aerospace Research Institute, with technical assistance from Eurocopter.

The twin-engine helicopter, which measures 4.44 meters in height and 19 meters in length, and weighs 8.7 tons, can carry nine troops in full gear and fly for two and a half hours with an operational range of 440 km. Its best range speed is 235 km per hour.

It is equipped with a forward-looking infra-red camera and radar equipment and a multi-function display system to enable it to conduct all-time, all-weather operations.

Designed with Korean’s mountainous terrain in mind, it is capable of conducting hovering missions at high altitudes of around 2,700 km. It has gone through flying tests on some 7,000 items without incident.

Industry watchers presume that the development of the helicopter would serve as a growth engine for the country’s aviation industry. The government hopes to export some 300 Surions over the next 25 years.