Cain pitched into the eighth inning to end the longest winless-streak of his career, and Hunter Pence accounted for all of the scoring in the Giants 4-3 victory over the Dodgers on Sunday night.

“All of the starters, we just hadn’t been throwing the way that we wanted,” said Cain, who struck out four and walked three. “All of us wanted to get us off that little skid that we were on. It just took some time.” 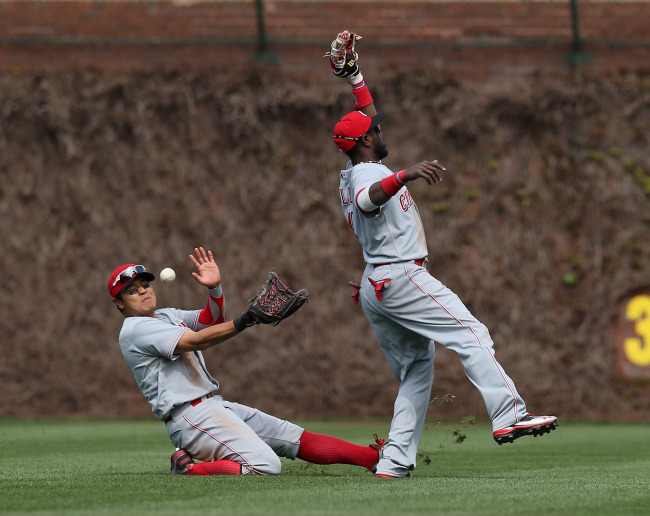 A ball hit by Alfonso Soriano of the Chicago Cubs falls between center fielder Choo Shin-soo (left) and second baseman Brandon Phillips on Sunday. Choo went 2 for 5 with a run and a stolen base. (AFP-Yonhap News)
Cain, who pitched six shutout innings against Los Angeles on opening day, gave up one run and five hits in 7 1/3 innings and allowed only one runner past second base to win for the first time since Sept. 26, 2012.

He left to a standing ovation from the AT&T Park crowd after issuing a one-out walk in the eighth, then watched from the dugout as five relievers teamed for the final five outs. It’s the first win by any San Francisco starting pitcher since April 21 ― an 11-game stretch.

“It took us a while ... but it was what we needed,” Giants manager Bruce Bochy said. “He got us into the eighth inning, and as usual our boys are entertaining and made it close again. But I was happy for Matt the way he threw the ball.”

Sergio Romo worked the ninth for his 12th save, tied for most in the majors.

The Giants extended their season-high winning streak to six games and defeated Los Angeles rookie Ryu Hyun-jin for the second time this year. 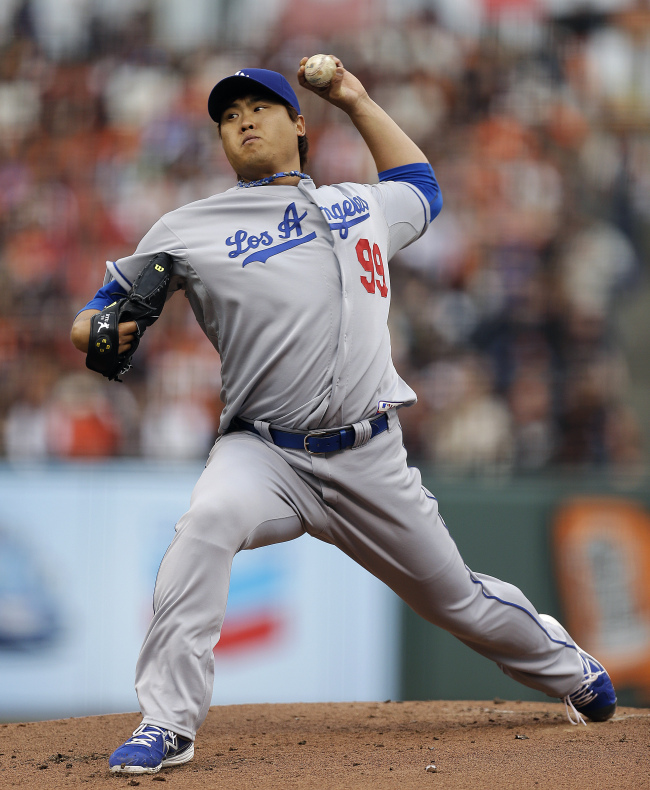 Los Angeles Dodgers starter Ryu Hyun-jin delivers in the first inning on Sunday. (AP-Yonhap News)
Ryu (3-2) has been one of the most consistent pitchers for Los Angeles except against San Francisco. He gave up 10 hits and three runs while taking the loss in his majors debut on April 2, then allowed eight hits and four runs over six innings in the rematch.

Joey Votto had three hits, Todd Frazier hit a two-run single and Cincinnati finished off the three-game set against the Chicago Cubs with a 7-4 victory on Sunday.

“It looked really ugly there,” Reds manager Dusty Baker said. “This wind plays havoc with the ball. I saw Choo break back and I knew that we were in trouble. I’m just glad we held on.”