The four-term lawmaker was long sidelined as the party was dominated by loyalists to the late former President Roh Moo-hyun. But Kim took advantage of grievances among rank-and-file members toward the mainstream faction to defeat its flag-bearer Lee Yong-sup. 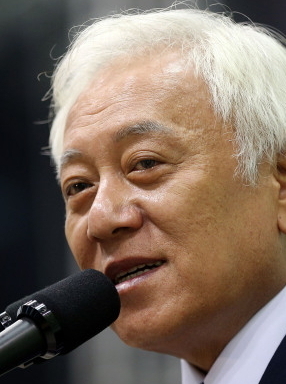 Rep. Kim Han-gil. (Yonhap News)
The new leader is expected to push a more centrist agenda, take on sweeping reforms and fight factionalism to restore the public’s trust in the party plagued by a series of election defeats.

He would also facilitate the rearrangement of fractured opposition groups with a greater openness to Ahn Cheol-soo, the former presidential candidate who recently returned to politics after winning a parliamentary by-election.

Before entering politics in 1996, Kim was a star novelist and TV host, which earned him a public image as a smart, reliable man with a sense of humor. He is married to actress Choi Myung-gil.

Kim played a crucial role in the 1997 presidential election that gave a landmark victory to Kim Dae-jung. He served as presidential policy secretary and culture minister.

Kim is a dexterous strategist and negotiator who led the candidacy merger between Roh and rival Chung Mong-joon in the 2002 presidential election.

He left the party with a group of lawmakers in resistance of pro-Roh figures ahead of the 2007 presidential election and created a centrist party.

After returning to the party with his tail between his legs, Kim continued with a crusade against the pro-Roh faction. Kim stepped down from the Supreme Council in 2012 calling on pro-Roh members to follow suit to show their commitment to renewal. It ended up a one-man stunt as no one joined him.