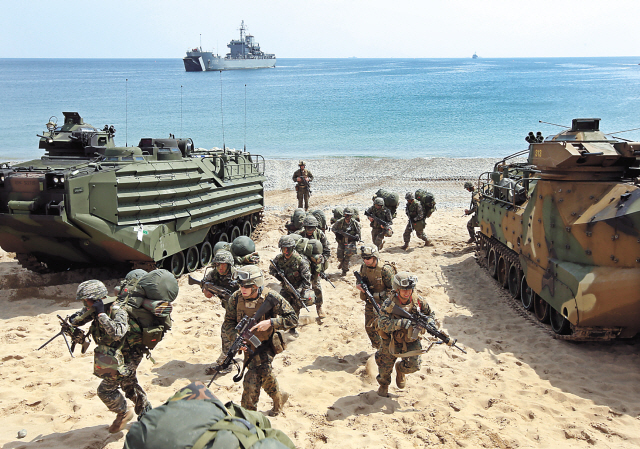 Forged after the 1950-53 Korean War, the alliance has become one of the world’s sturdiest security cooperation models and the cornerstone for peace and stability on the peninsula and in Northeast Asia.

Now the two countries are seeking to further upgrade their ties to take on broader roles in regional security and global issues.

President Park Geun-hye and Barack Obama plan to adopt a joint declaration to mark the 60th anniversary of the military alliance during their summit Wednesday, which comes amid Pyongyang’s escalating nuclear threats and a shift in the regional order stemming from an increasingly assertive China.

One task facing the alliance is to ensure it can adapt to changes in regional security and politics. The revision of a civilian nuclear energy pact is another tricky issue.

“Thinking of the U.S. as a potential competitor, China could regard the alliance as antithetical to its national interests,” said Kim Tae-hyun, international politics professor at Chung-Ang University.

“How to accommodate the alliance flexibly in the shifting order in Northeast Asia, while ensuring its readiness to handle a wide range of contingencies on the Korean Peninsula, is one daunting task facing the two countries.”

For Seoul, the alliance, the centerpiece of its national security, offered the crucial foundation upon which it was able to rise from the ashes of the Korean War to become the world’s 15th-largest economy.

“Based on the robust security alliance, the South has seen its economy grow with its trade and exchanges in the U.S.-led liberal world expanding,” said Kim Ho-sup, international relations professor at Chung-Ang University.

“Also on the back of the U.S. support in terms of advanced technology, governance and culture, the South has become a success story as it developed into a full-fledged democracy from a military dictatorship.”

The alliance has also helped to protect America’s security interests in deterring the increasingly provocative North, which has continued to threaten the U.S. and its allies, including Japan, with its increased nuclear and missile capabilities.

The recent military threats by Pyongyang have reaffirmed the alliance’s critical role in peninsular and regional peace. Underscoring its cohesion, the allies have made a swift and coordinated response to rein in Pyongyang.

Particularly at the time of an intensifying Sino-U.S. rivalry, the strategic importance of the alliance has increased, experts pointed out.

“The Korean Peninsula is of great geostrategic importance for the U.S. as it seeks to effectively cope with the increasing assertiveness of China, which has escalated territorial disputes in the East and South China seas,” a security expert said, declining to be named.

“The task for the two allies for now is to maintain a healthy, effective alliance amid the rise of China. Korea is the only Northeast Asian continental state that stations U.S. troops, which underlines its strategic significance for Washington.”

Despite the allies’ interest in strengthening security and economic cooperation, there are problems that could hamper their partnership.

One is uncertainty over the Sino-U.S. relationship. As China is increasingly flexing its economic and military clout, the U.S. has been stepping up efforts to maintain its influence in the Asia-Pacific.

After a decade of war in Iraq and Afghanistan, the U.S. has been conducting a “pivot” toward this economically vibrant region. Beijing is uneasy with the policy, apparently believing it is intended to keep it in check.

The emerging rivalry between the big powers could put Seoul in an increasingly tough diplomatic position. China has hefty influence over the North and is the South’s largest partner in trade and tourism.

“It is only hypothetical whether the Sino-U.S. relationship would move on a path of confrontation or friendship. But if their relationship is beset by conflicts, that would pose a great challenge to South Korea’s diplomacy,” said professor Kim Ho-sup.

Some pundits said reshaping the U.S. alliance into a comprehensive security mechanism would be an option as the North Atlantic Treaty Organization, incepted to defend against the communist bloc, has developed into a multirole institution tackling an array of transnational issues.

“People talk about crafting an institution for multilateral security cooperation in Northeast Asia. We can think about a way to accommodate the South Korea-U.S. alliance as part of that,” said professor Kim Tae-hyun.

Another critical issue facing the allies is their coordination of policy on North Korea’s denuclearization.

Seoul and Washington have so far put up a united front to curb Pyongyang’s nuclear adventurism. But there has been a subtle difference in their approaches to the nuclear threat, spawning concerns over possible difficulties in the allies’ policy coordination.

The South has focused on the denuclearization goal. The U.S. has focused more on proliferation issues that could immediately threaten its national security, although it has clarified its ultimate goal of a denuclearized peninsula.

A series of crimes involving U.S. military personnel here, such as drug dealing, rape and assault, have also deteriorated the public sentiment against the American military presence.

Preventing such issues from needlessly developing into emotion-laden, ideological and political disputes is crucial to maintaining the current level of the allies’ cohesion, experts said.