[ The Korea Herald – Send E-mail ]
U.S. general says wartime control transfer ‘on track’
By Korea Herald
Published : May 3, 2013 - 21:05
Updated : May 3, 2013 - 21:05
The commanding general of the U.S. Eighth Army said Friday his military has been working together with South Korean forces to transfer wartime operational control to Seoul as agreed, saying preparations are “on track.”

Lt. Gen. John Johnson reaffirmed the 60-year alliance between South Korea and the U.S. and vowed to help deter North Korean aggression even after Seoul takes over wartime control in December 2015.

“Our plans to achieve OPCON transfer are on track,” Johnson said in a lecture hosted by the Korea Chamber of Commerce and Industry. “The ROK (South Korean) military is more than capable and understands the complex battlefield to be able to direct the combined forces as necessary to defend (South) Korea.” 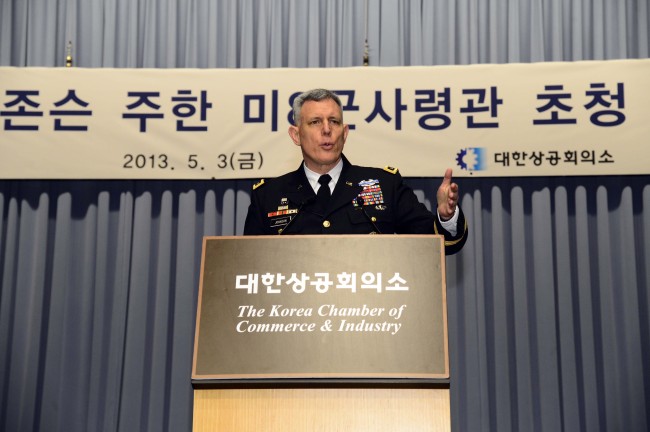 Lt. Gen. John Johnson, commander of the U.S. Eighth Army, speaks during a lecture hosted by the Korea Chamber of Commerce and Industry in Seoul on Friday. (Park Hae-mook/The Korea Herald)

His remarks come as calls have grown for delaying the planned OPCON transition as tensions are running high on the Korean Peninsula. Pyongyang has repeatedly threatened nuclear strikes against the South and the U.S. in response to their joint drills that ended recently.

Seoul and Washington agreed to assess the South Korean military’s capability twice next year during routine trainings, and conduct the last evaluation of their full mission capability prior to implementing the agreement.

The American commander said the decision to reschedule will be a political decision and soldiers are obligated to execute it. Currently, the South Korean military remains in command under normal armistice circumstances, but Gen. James Thurman, as the commander of U.S. Forces Korea and United Nations forces, would assume operational control in case of war.

If war breaks out, the Eighth Army would lead evacuation operations of civilians to foreign countries, and form a joint task force to conduct unified land operations.

Seoul and Washington have been working to make a new command structure to maintain a combined posture even after the current joint body is dissolved after the transfer.

Under the new structure, the South Korean military will play a leading role, and American forces will support their role during a potential wartime situation, fighting side by side with their Korean allies.

The two Koreas remain technically at war as the 1950-53 Korean War ended in an armistice, rather than a peace treaty. About 28,500 U.S. troops are stationed in South Korea. (Yonhap News)