Carlos Gonzalez gave the Rockies a 1-0 lead in the first inning with a home run ― but it didn’t last long.

Ryu (3-1) was in control throughout most of his outing.

After giving up the home run to Gonzalez, he retired 14 of the next 15 batters he faced. His only blemish during that stretch was a one-out walk to Gonzalez in the fourth inning. 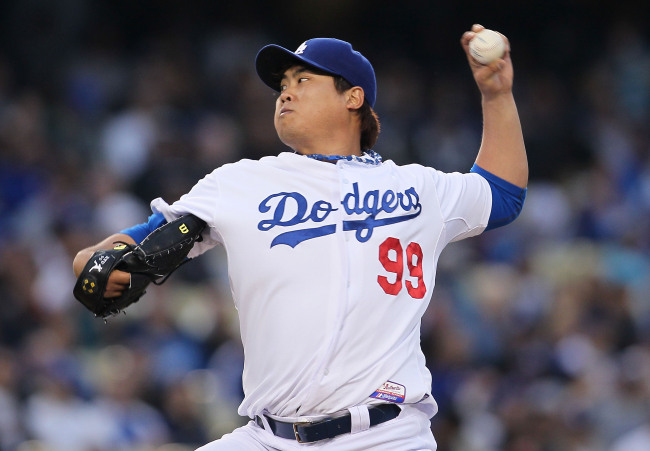 Los Angeles Dodgers pitcher Ryu Hyun-jin delivers in the first inning on Tuesday. (AFP-Yonhap News)
Ryu put an end to the threat and his night by striking out Jordan Pacheco.

Ramirez, who had been sidelined after undergoing thumb surgery in the offseason, highlighted his return with a solo home run in the third inning.

The Dodgers countered with a run-scoring single by Matt Kemp and a sacrifice fly by Adrian Gonzalez in the bottom half of the first, then added to the lead in the second when Jerry Hairston Jr., a late replacement for Carl Crawford, singled home Juan Uribe from second base. Hairston took second when left fielder Michael Cuddyer tried to throw Uribe out at home.

Crawford was scratched from the lineup with tightness in his right hamstring but will likely be back in left field Wednesday.

Nick Punto’s second hit in as many innings scored Hairston and gave the Dodgers a 4-1 lead. Ramirez’s home run provided the Dodgers with a four-run cushion.

The Dodgers extended the third inning when Andre Ethier doubled and scored on a hit by Ryu.

ST. LOUIS (AP) ― Jaime Garcia seems to save his best for the Cincinnati Reds.

The St. Louis left-hander dominated Cincinnati again with eight strong innings, Matt Holliday hit a two-run homer and the Cardinals snapped a three-game losing streak with a 2-1 win over the Reds on Tuesday night.

Garcia (3-1) gave up one run on seven hits, struck out three and did not walk a batter. He improved to 7-0 in eight starts against Cincinnati at Busch Stadium and is 9-2 overall with a 3.18 ERA against them in 13 starts. He retired the last seven batters he faced and recorded 18 ground ball outs.

“They’ve got a really strong lineup and they take good at-bats,” Garcia said. “I just try to make good pitches against them and it’s been working.”

Edward Mujica struck out the side in the ninth for his fifth save in as many chances. Bronson Arroyo (2-3) allowed two runs on six hits over seven innings for the Reds, whose win streak ended at three games. Arroyo has had four quality starts in six outings this season.

Holliday drilled a line drive over the left-field wall in the sixth inning, his third homer of the season. Carlos Beltran, who had three hits for the Cardinals, had singled with one out before Holliday went deep.